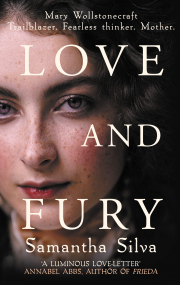 ‘NOW, DAUGHTER, I’M TO TELL YOU A STORY TO COAX YOU INTO THE WORLD…'

London 1797. Mary Wollstonecraft awaits the arrival of the midwife who will help bring her child into the world, and support her through the testing eleven days that follow.

After the birth, both mother and daughter fight for survival. Even as Mary’s strength wanes, she urgently weaves the tale of her life to bind her frail Little Bird close.

Wollstonecraft’s journey to vindicate the rights of women spanned Europe and broke the conventions of the time. Amid the triumph and loss, she blazed a trail and passed that legacy on to her child, the future Mary Shelley.

Love and Fury reclaims the all too brief moment when the stories of mother and daughter overlapped. It is a lyrical and moving tribute to an influential thinker and a remarkable woman.

I found this to be a brilliantly written and poignant read, allowing me to learn so much more about Mary Wollstonecraft, mother of Mary Shelley, who I ashamedly knew very little about. Not any more!!

The story is told through her eyes and those around her as she prepares to give birth to her 2nd daughter - both she and the girl are poorly so it's touch and go whether either or both make it through.

Seeing the story unfold through the eyes of the midwife was also a great viewpoint.  She's seen it all before in her work, but calm soon turns to nerves as things take longer to progress than they should and she finds herself spending more and more time at the house with Mary and becomes so involved with the family as she watches over her and the little one.

And as Mary lies battling poor health, she is telling her life story to her young daughter and what a story it is.  It really gives you a great insight into just how tough things were for women throughout her childhood when nothing is expected of them, other than to marry and reproduce.  But the young Mary had different ideas and was a wonderful trailblazer and it was inspiring to read her story and support her struggles. Despite society saying otherwise, she was always determined that women should be able to do what they wanted and not live a restricted life, just because of their gender.

She wasn't only fighting against society, but her family so you can't help but be in awe of her commitment and spirit. It never waivered and this book is a beautiful way of telling her story.