#BookReview AN EMOTION OF GREAT DESIRE by TAHEREH MAFI 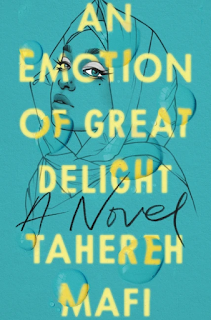 ABOUT THE BOOK
From bestselling and National Book Award-nominated author Tahereh Mafi comes a stunning novel about love and loneliness, navigating the hyphen of dual identity, and reclaiming your right to joy--even when you're trapped in the amber of sorrow.It's 2003, several months since the US officially declared war on Iraq, and the American political world has evolved. Tensions are high, hate crimes are on the rise, FBI agents are infiltrating local mosques, and the Muslim community is harassed and targeted more than ever. Shadi, who wears hijab, keeps her head down.She's too busy drowning in her own troubles to find the time to deal with bigots.Shadi is named for joy, but she's haunted by sorrow. Her brother is dead, her father is dying, her mother is falling apart, and her best friend has mysteriously dropped out of her life. And then, of course, there's the small matter of her heart--It's broken.Shadi tries to navigate her crumbling world by soldiering through, saying nothing. She devours her own pain, each day retreating farther and farther inside herself until finally, one day, everything changes.She explodes.An Emotion of Great Delight is a searing look into the world of a single Muslim family in the wake of 9/11. It's about a child of immigrants forging a blurry identity, falling in love, and finding hope--in the midst of a modern war.
PUBLISHED BY HARPERCOLLINS
PURCHASE LINK
Amazon

This was a really powerful and emotional read that explores the angst of teenage years alongside dealing with racism, and in Shadi, the author has created a character who has dealt with so much and is struggling to find her place in a world where she still feels an outsider.Set amongst the backdrop of the Americans invading Iraq after 9/11, Shadi and the muslim population are coping with rising tensions and she's easy to pick out as she wears a hijab but keeps her head down and wants to be left alone -easier said than done.She is a young girl who has had to deal with so much so is dealing with grief after losing her brother - the story of his death is drip fed into the storyline which works so well - and dealing with her parents who are also grieving his death, and the storyline flits from now to then so you get to see how things build up to this point and helps explain how events are playing out.The sense of loss is overwhelming so you cannot help but feel for Shadi, and there's no escape at school where she's singled out and even loses her best friend, although you find out that's due to other circumstances. It really shows the extremes of her life - from a happy moment where she forgets her worries, to the doom and gloom of the news or being bullied. She's on a real emotional rollercoaster and there seems to be no end to the drama.The author really packs a lot into each chapter and I really enjoyed seeing life from the viewpoint of Shadi - it really amplifies the problems of a teenager alongside the stark reality of racism and small minded attitudes of others whipped up by the media.