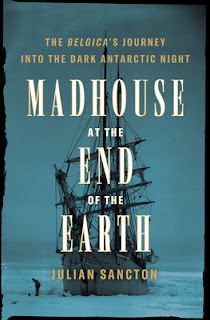 ABOUT THE BOOK
The harrowing true survival story of an early polar expedition that went terribly awry--with the ship frozen in ice and the crew trapped inside for the entire sunless, Antarctic winter--in the tradition of David Grann, Nathaniel Philbrick, and Hampton Sides“Deserves a place beside Alfred Lansing’s immortal classic Endurance.”—Nathaniel Philbrick“A riveting tale, splendidly told . . . Madhouse at the End of the Earth has it all.”—Stacy Schiff“Julian Sancton has deftly rescued this forgotten saga from the deep freeze.”—Hampton SidesIn August 1897, thirty-one-year-old commandant Adrien de Gerlache set sail aboard the Belgica, fueled by a profound sense of adventure and dreams of claiming glory for his native Belgium. His destination was the uncharted end of the earth: the icy continent of Antarctica. But the commandant's plans for a three-year expedition to reach the magnetic South Pole would be thwarted at each turn. Before the ship cleared South America, it had already broken down, run aground, and lost several key crew members, leaving behind a group with dubious experience for such an ambitious voyage.As the ship progressed into the freezing waters, the captain had to make a choice: turn back and spare his men the potentially devastating consequences of getting stuck, or recklessly sail deeper into the ice pack to chase glory and fame. He sailed on, and the Belgica soon found itself stuck fast in the icy hold of the Antarctic continent. The ship would winter on the ice. Plagued by a mysterious, debilitating illness and besieged by the monotony of their days, the crew deteriorated as their confinement in suffocating close quarters wore on and their hope of escape dwindled daily. As winter approached the days grew shorter, until the sun set on the magnificent polar landscape one last time, condemning the ship's occupants to months of quarantine in an endless night.Forged in fire and carved by ice, Antarctica proved a formidable opponent for the motley crew. Among them was Frederick Cook, an American doctor--part scientist, part adventurer, part P.T. Barnum--whose unorthodox methods delivered many of the crew from the gruesome symptoms of scurvy and whose relentless optimism buoyed their spirits through the long, dark polar night. Then there was Roald Amundsen, a young Norwegian who went on to become a storied polar explorer in his own right, exceeding de Gerlache's wildest dreams by leading the first expeditions to traverse the Northwest Passage and reach the South Pole.Drawing on firsthand accounts of the Belgica's voyage and exclusive access to the ship's logbook, Sancton tells the tale of its long, isolated imprisonment on the ice--a story that NASA studies today in its research on isolation for missions to Mars. In vivid, hair-raising prose, Sancton recounts the myriad forces that drove these men right up to and over the brink of madness.
PUBLISHED BY CROWN
PURCHASE LINK
Amazon
MY REVIEW
Brilliant!! I knew nothing of The Belgica but this book transports you on board to share the crew in their excited expectancy of the expedition ahead, followed by the misery, despair and fear of when it all went spectacularly wrong and they all feared for their lives.In 1897, a crew was put together by Adrien de Gerlache to explore the Antarctica - he wanted to be first to find the magnetic South Pole. But from the beginning they were plagued with disaster and you sensed even then that maybe this expedition was cursed. But his determination to achieve the impossible kept it all on track, alongside the mix of characters he employed to join him.And the characters we are introduced to are brilliantly profiled by the author. We get to hear of their individual stories, their childhoods, their pasts and what drives a certain kind of person to want to put themselves in a position to explore unchartered territory.This book draws on the diaries and journals of those on board, and the levels of detail really make you think you're on the ship with them. Even when all around them is going wrong, you get the sense that they wouldn't be defeated, although that is partly down to the single mindedness of de Gerlache who often put them all in danger just to make his dreams come true.From the sickness, to the madness brought on by being stranded in the ice for months with no sign of rescue or hope, this is an amazing look at the lengths humans are driven to in the pursuit of personal achievement.What made this even more amazing for me was the use of photos, taken by the Doctor, Cook, who really helped on so many levels with the crew in keeping them from suffering too much, while keeping his own mental health in check. The isolation and months of darkness really took their toll on many of the staff and he was quick to pick up on changes needed in their food and stimulation needed to keep minds focussed.Their desperate plans to try and free themselves from the ice made for some harrowing reading and the fact that their lives were reliant on 'nature' was the ultimate test of strength both mentally and physically for them and I just couldn't believe the courage/stupidity/braveness of those on board!!An epic read about an epic exploration that went badly wrong!!
★★★★★
Posted by Books and Me! at Monday, July 12, 2021