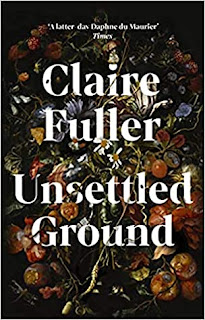 ABOUT THE BOOK
What if the life you have always known is taken from you in an instant? What would you do to get it back?Twins Jeanie and Julius have always been different from other people. At 51 years old, they still live with their mother, Dot, in rural isolation and poverty. Their rented cottage is simultaneously their armour against the world and their sanctuary. Inside its walls they make music, in its garden they grow (and sometimes kill) everything they need for sustenance.But when Dot dies suddenly, threats to their livelihood start raining down. At risk of losing everything, Jeanie and her brother must fight to survive in an increasingly dangerous world as their mother's secrets unfold, putting everything they thought they knew about their lives at stake.This is a thrilling novel of resilience and hope, of love and survival, that explores with dazzling emotional power how the truths closest to us are often hardest to see.
PUBLISHED BY FIG TREE
MY REVIEW
I listened to the audio version of this book.
This author has such a wonderful way with the characters she creates! This isn't a joyful book to lift the spirits, but it's a story of the impact of family secrets on characters who have been shielded from the world for so long that when their world is shattered they don't really know how to process what is happening.
Twins Jeanie and Julius are in their 50's and still live at home with their mother. She's protected them from the 'real world' so when she passes, the reality hits them hard. Their mother never accepted help from others, so they are determined to do things their own way despite a lack of money and lack of real awareness of how the world operates.
We hear more of the story from the viewpoint of Jeanie, who seems to have a fairly optimistic approach to what life throws her way and hates the fuss of people in the village offering their help. She has her gardening to help her escape and that is her distraction from the unfolding events of being evicted from their home.
You couldn't help but feel for the twins - they'd always been looked on as odd by the locals, but to them they were living a 'normal' family life, helping their mother, pulling together and just getting on with things - never making a fuss. The more they begin to see the world for what it's really like, and the more the secrets about the past begin to reveal themselves the more shocking the story becomes!
The slow pace really allows you to get under the skin of these characters and adds to the impact of the revelations as they are discovered. The realisations of being lied to, the consequences that those lies have made.... just devastating! A beautifully written book.
★★★★
Posted by Books and Me! at Saturday, August 14, 2021