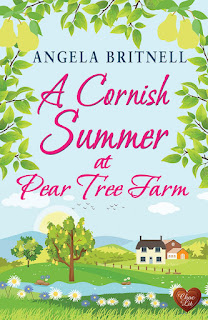 Another treat for me today, to get to hand over the Blog once again to the lovely Angela Britnell so she can share her thoughts with you on Publication Day for the fabulous A CORNISH SUMMER AT PEAR TREE FARM!!  Get downloading it NOW!!
Over to you Angela....
🌞🌞🌞

Thank you so much for inviting me over to say hello on publication day for A Cornish Summer at Pear Tree Farm! When it became obvious earlier in the year that I wouldn’t be able to travel across the pond and enjoy a real Cornish summer yet again, I decided a fictional one would do the trick which is when this book came to life.

I soon discovered at the core of Nessa Vivian’s character was a generous heart towards people who needed a refuge from their everyday lives which struck me as fortuitous because in a way she ended up doing the same thing for me. She also has the very special quality of not having to know the reason why someone needs her help but simply accepting that they do. The way Nessa sees it, if they want to tell her they will. Polly and Jack Green have lived on the site for thirty years without ever explaining to Nessa, or her parents before her, why they left Birmingham in the first place, why they’ve never returned or had any family come to visit them at Pear Tree Farm. Nessa treats army veteran Crispin Davies the same way. Almost three years earlier, he turned up in the middle of winter asking for a place to pitch his tent in return for work around the site. The hardworking Welshman is a loner and Nessa respects his reticence and never presses him to talk about his past. But things change when Ward Spencer arrives. Their mutual attraction is obvious from day one, but he’s clearly a man with secrets and for once that isn’t good enough for her. She’ll have to decide whether to break her golden rule or risk losing something – and someone – very special.

what they asked for. You’ll have to read A Cornish Christmas at Pear Tree Farm, due out in December, to find out if they took it!

Cornish charm and a Tennessee twist – the perfect pair?

Nessa Vivian is determined to keep her parents’ business afloat, but Pear Tree Farm near the backwater Cornish village of Polgarth didn’t do well as farm, and it’s not faring much better as a camp site. Maybe it’s due to Nessa’s habit of taking in troubled runaways, like ex-soldier Crispin, for next to nothing. Or perhaps her highly-strung sister Lowena is right – caravans named after Beatles’ songs and homegrown pears are not enough to turn the farm into a tourist haven.

Then another troubled runaway turns up, posing the greatest threat yet. Ex-musician Ward Spencer from Tennessee is certainly intriguing, but could his plans to put nearby Tregereth House on the map mean Pear Tree Farm is finished – or does his arrival signal a second lease of life, and not just for Nessa’s business? 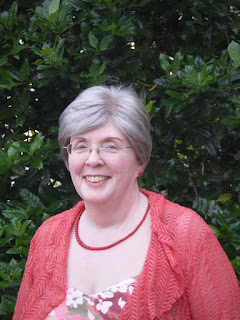 Angela was born in St. Stephen, Cornwall, England. After completing her A-Levels she worked as a Naval Secretary. She met her husband, a US Naval Flight Officer, while being based at a small NATO Headquarters on the Jutland Peninsula in Denmark. They lived together in Denmark, Sicily, California, southern Maryland and London before settling in Franklin, Tennessee.

Angela took a creative writing course in 2000 and loved it so much that she has barely put her pen down since. She has had short stories and novels published in the US. Her novel Sugar & Spice, won Choc Lit’s Search for an American Star competition and was her UK debut.