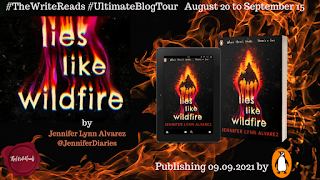 Delighted to be with you today as part of the Blog Tour for the wonderful LIES LIKE WILDFIRE by JENNIFER LYNN ALVAREZ..  My thanks to the author, publisher and The Write Reads for putting the tour together and letting me be part of it all! 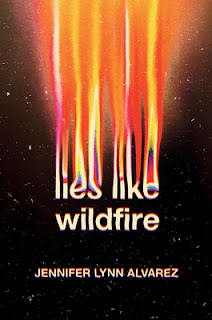 ABOUT THE BOOK
An intense high-stakes story about five friends and the deadly secret that could send their lives up in flames, perfect for fans of Karen McManus and E. Lockhart.In Gap Mountain, California, everyone knows about fire season. And no one is more vigilant than 18-year-old Hannah Warner, the sheriff's daughter and aspiring FBI agent. That is until this summer. When Hannah and her best friends accidentally spark an enormous and deadly wildfire, their instinct is to lie to the police and the fire investigators.But as the blaze roars through their rural town and towards Yosemite National Park, Hannah's friends begin to crack and she finds herself going to extreme lengths to protect their secret. Because sometimes good people do bad things. And if there’s one thing people hate, it’s liars.
PUBLISHED BY PENGUIN
PURCHASE ORDER
Amazon
MY REVIEW
This is a thrilling, and chilling!, YA novel that explores the dark sides of youth, where the consequences of their action spirals out of control!  And what follows is the story of lies,tension, regrets and betrayals and I thoroughly enjoyed it - I can already picture the drama series on TV!!
A group of friends are out in the woods and accidentally start a fire - the impact of which is deadly! They don't want to admit responsibility for their actions so they make a pact to stay silent - they weren't there. They saw nothing.  But that involves trying to cover their tracks and soon cracks start to appear in their stories, and as the death toll rises, the conscience of some of the group starts to get the better of them... much to the disgust of others.
This is a really clever book as it covers so many relevant topics of the time - the dangers of using flames in a dry area and how quickly that can spread and how the local areas have to deal with the devastation of one reckless act.  It does get  very dark at times but really does show the impact of peer pressure and how selfish some people can be to save their own backsides.
It is fast paced and disturbing but a gripping read showing the impact of a rash decision that leads to such devastating consequences for so many innocent people.  How quickly life can change.....
★★★★
Posted by Books and Me! at Tuesday, September 07, 2021