#BookReview A BOOK AT BEDTIME by BARRIE SHORE 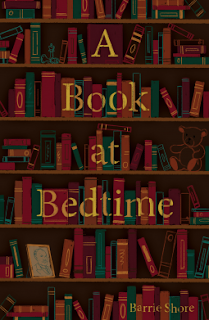 ABOUT THE BOOK
On a cold December Sunday, book-seller Jack Carter struggles to make breakfast for his wife Eva, whose dementia confines her body to her bed and her mind to a world of its own. Now memory and misremembering, invention and daydreaming combine to piece together their life story.Jack wages a constant battle with Margaret, Eva’s carer, and tries to fend off Dodie, Eva’s bossy best friend, who thinks they’d both be better off in a home. He conjures ghosts from his past including his daunting mother and his mentor Bob Pride whose own past is linked with Oscar Wilde.There is also The Great Man, a famous Dorset writer whom the boy Jack once met during his days as a book-seller’s assistant, and who choses this day to come and call. Comical and acerbic, he forces Jack to confront the past, until the truth finally emerges.A moving by darkly funny story about memory, love, loss and forgiveness.
PUBLISHED BY MATADOR
PURCHASE LINK
Amazon

This is one of those quiet, but stunningly powerful books that can't help but get you emotionally involved in the lives of the characters.This is the story of Jack and Eva, mostly told from the viewpoint of Jack as he cares for Eva who has dementia and can't speak and is bedbound. It's a look back at their lives together, interspersed with the realities of caring with a loved one with dementia and all that entails. It's heartbreaking to hear his thoughts as he just wants to be with his wife, but the carers who come in to help complicate matters with 'health and safety' issues and you really get a sense of his frustrations - at them, the illness and all that has gone on through their lives together.This is a story where he's trying to make peace with the past as he looks back at various stages - from his childhood, when he first met Eva and to their lives together. Times have been unkind to them both and you really get a sense of that sadness. He finds solace in talking about The Great Man (Thomas Hardy, but never named!) he met, and his time working at the small bookshop where they currently live. It has become such an integral part of their life, despite the impracticality of their current situation. As he looks back, secrets of the past reveal themselves and finally get acknowledged when they didn't at the time.My heart was breaking for Jack as he tells you his story - his life has been tough and doesn't seem to be letting up for him now in his dotage. The patience he shows for Eva is evident, but there's also that conflicting emotion in him wishing her dead as there's no dignity for her, or him, as she suffers with this illness. And having a viewpoint from Eva also allows you to see inside the world as she views it, which was really poignant and powerful. It isn't afraid to confront the important issues such as dementia, sexuality and does so in a realistic way.An emotional and beautiful story that has plenty to make the reader both laugh and cry. Highly recommended!

My thanks to Netgalley for the advanced reader copy in return for a fair and honest review.