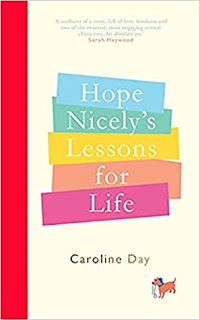 ABOUT THE BOOK
'I don't have any friends, only dog ones, because they don't make you do bad things. I don't want any human friends, actually. It's for the best.'Hope Nicely hasn't had an easy life.But she's happy enough living at 23 Station Close with her mum, Jenny Nicely, and she loves her job, walking other people's dogs. She's a bit different, but as Jenny always tells her, she's a rainbow person, a special drop of light.It's just...there's something she needs to know. Why did her birth mother abandon her in a cardboard box on a church step twenty-five years ago? And did she know that drinking while pregnant could lead to Hope being born with Foetal Alcohol Spectrum Disorder?In a bid to find her birth mother and the answers to these questions, Hope decides to write her autobiography. Despite having been bullied throughout school, Hope bravely joins an evening class where she will not only learn the lessons of writing (including the number one golden rule of 'show don't tell'), but may also begin to discover more about the world around her, about herself and even make some (human) friends.But when Jenny suddenly falls ill, Hope realises there are many more lessons to come...Hope Nicely's Lessons for Life is a heart-warming, coming-of-age novel about loneliness, friendship, acceptance and, above all, hope.
PUBLISHED BY ZAFFRE
PURCHASE LINK
Amazon
MY REVIEW
This is a story that centres around a young woman with Foetal Alcohol Spectrum Disorder and we hear her tell her story and get to understand a little more about the disorder, and it does pull at the heartstrings! It did take me a little while to 'get' the way the story was told but once I'd connected more with the character and understood more about how the disorder affects her, you couldn't help but become more attached to her and cheering her on from the sidelines!We join her as she's about to delve into her past as she wants to find out more about her birth mother - the woman who 'dumped' her on a doorstep, allowing her to be adopted by the lovely Jenny. You can sense just how much they mean to one another and when poor health hits Jenny, you pick up immediately on the shock waves that sends through Hope. Her stable little world becomes a little shakier.As Hope joins a local writing class she is faced with new challenges such as socialising and understanding all that life throws at her. It was wonderful seeing how others started to reach out to her when they understood more about her and shows you the good side of people!An emotional read about a gutsy character, that has moments that made you tear up, alongside those that made you giggle !
★★★★
Posted by Books and Me! at Tuesday, September 28, 2021