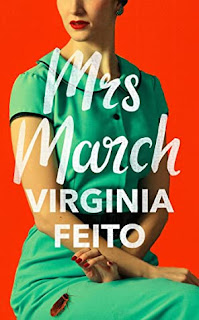 ABOUT THE BOOK
Shirley Jackson meets Ottessa Moshfegh meets My Sister the Serial Killer in a brilliantly unsettling and darkly funny debut novel full of suspense and paranoiaGeorge March’s latest novel is a smash hit. None could be prouder than Mrs. March, his dutiful wife, who revels in his accolades and relishes the lifestyle and status his success brings.A creature of routine and decorum, Mrs. March lives an exquisitely controlled existence on the Upper East Side. Every morning begins the same way, with a visit to her favourite patisserie to buy a loaf ofolive bread, but her latest trip proves to be her last when she suffers an indignity from which she may never recover: an assumption by the shopkeeper that the protagonist in George March’s new book –a pathetic sex worker, more a figure of derision than desire – is based on Mrs. March.One casual remark robs Mrs. March not only of her beloved olive bread but of the belief that she knew everything about her husband – and herself – sending her on an increasingly paranoid journey, onethat starts within the pages of a book but may very well uncover both a killer and the long-buried secrets of Mrs. March’s past.A razor-sharp exploration of the fragility of identity and the smothering weight of expectations, Mrs. March heralds the arrival of a wicked and wonderful new voice.
PUBLISHED BY FOURTH ESTATE
PURCHASE LINK
Blackwell's

This was a slow burner of a book, but it grabbed me completely. I found it to be quiet and unassuming at times, but a devastating character study of a woman clearly struggling with her mind and the depths that paranoia take her to.Mrs March is the wife of a very successful author, bringing them both a very comfortable life. Her husband is away a lot so she seems to fill her days with shopping, parties - and overthinking! And it was a comment overhead about a character in her husbands book, that triggers another wave of self doubt and leads her on a path of distrust. She starts to see the book wherever she is, almost like it is taunting her.The story looks at her past, how she met George and how their relationship blossomed to how it is now, and alludes to her having lived a troubled childhood too. You are never quite sure with her narration just how much to believe, and when she starts to believe that her husband is involved with the disappearance of a woman where he recently stayed, we get to witness just how her damaged mind processes the possibilities and the lengths she'll go to prove his guilt.There's such a sadness about the characters involved in this book - it's all about appearance and status, and how a simple throwaway comment can impact on the outlook of somebody who obviously has been damaged in the past due to her upbringing.I know this book has split opinions, and it's definitely not a 'light' read but I found it to be captivating in a dark and disturbing way!