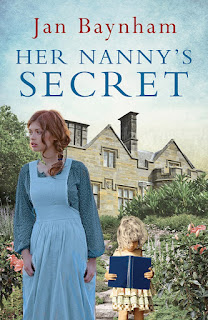 Delighted to be handing over the Blog today to JAN BAYNHAM to celebrate publication day for HER NANNY'S SECRET!  Go grab your copy NOW!!!
Over to you Jan......

‘Her Nanny’s Secret’ is my third novel. Excited yet very nervous before publication day, it is a story I loved writing. It has all the features which are becoming my trademark – a dual timeline, contrasting locations, family secrets and forbidden love. In ‘Her Nanny’s Secret’, there is also the theme of social class and the role of women.

The inspiration for the story came to me through a conversation with my cousin after my aunt’s funeral which opened with the words, “You know you could have been a Thomas not an Evans, don’t you? I can tell you now mum’s gone…” Puzzled, I asked her to explain. Apparently, my grandfather was the illegitimate son of a female groom and a wealthy landowner who owned the stables where she worked. The ‘what-ifs’ started in my head. What if you fell for someone from a different social class? What if you had to keep it a secret from everyone close to you for fear of losing your home and your family’s livelihood? I set my story in 1941 when war was raging in Europe. After her youngest brother, Reggie, enlists to fight for King and country, Annie Beynon applies to replace him as a groom at Cefn Court, a large country house. She is faced with opposition from her father and her fellow stable lads.

The boys looked at each other in what Annie soon realised was disbelief, and then looked her up and down.

‘A girl. What use is she going to be?’ said Harry, the tall, gangly one.

‘More work for us, then,’ grumbled Fred.

The novel takes place in two locations I know well. Rural mid-Wales where I was born and grew up was relatively untouched by the horrors of actual war action but for the families whose husbands, lovers and sons died in active service, the grief and sense of loss was very real. I tried to create images of what it would have been like living in a small rural village surrounded by a beautiful natural landscape during wartime and then again in 1963. In contrast, my character, Odile, lived in occupied Northern France,

playing an important role in the French Résistance in 1943. When Annie and Clara visit the same area twenty years later in order to find answers, I was able to draw on what I’d experienced on annual family holidays to France and years of hosting children and adults from our twin-town to try to give authenticity. I hope I’ve done justice to the country I love, its people, culture and language.

‘As they entered the tiny village, a yellow road sign with three flower symbols proudly welcomed the visitor to a Village Fleuri… France was still in a period of reconstruction after the devastation caused by the war, and it was felt that the planting of flowers helped renew and repair communities.’

I do hope readers will enjoy ‘Her Nanny’s Secret’.

How far would you go to save the person you loved the most?

It’s 1941, and Annie Beynon has just become the first stable girl for the most powerful family in her Welsh village. Whilst her gift for working with horses is clear, there are some who are willing to make her life very difficult on the Pryce estate, simply for being a girl.

There are other – secret – ways Annie is defying conventions, too. As the war rages, and when Edmund, the heir to the Pryce fortune, leaves to join the RAF, it seems that it’s only a matter of time before Annie’s secret is exposed. That is, until she makes a shocking decision.

It’s 1963 before Annie is able to face up to the secret she chose to keep over twenty years before. Justifying that decision takes her to Normandy in France, and an outcome she could never have expected … 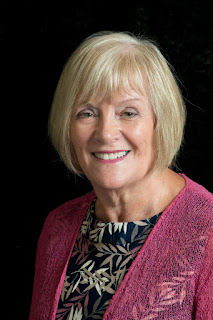 After retiring from a career in teaching and advisory education, Jan joined a small writing group in a local library where she wrote her first piece of fiction and from then on, she was hooked! She soon went on to take a writing class at the local university and began to submit short stories for publication to a wider audience. Her stories and flash fiction pieces have been longlisted and shortlisted in competitions and several appear in anthologies both online and in print. In October 2019, her first collection of stories was published. Her stories started getting longer and longer so that, following a novel writing course, she began to write her first full-length novel. She loves being able to explore her characters in further depth and delve into their stories. Originally from mid-Wales, Jan lives in Cardiff with her husband. They have three grown up children and four grandchildren, with another little one expected in the summer. Having joined the Romantic Novelists Association in 2016, she values the friendship and support from other members and regularly attends conferences, workshops, talks and get togethers. She is co-organiser of her local RNA Chapter.