#BookReview AND AWAY by BOB MORTIMER #Audiobook 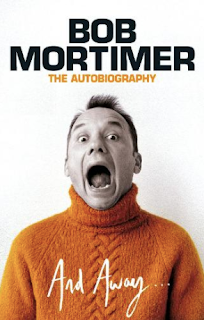 ABOUT THE BOOK
Bob Mortimer's life was trundling along happily until suddenly in 2015 he was diagnosed with a heart condition that required immediate surgery and forced him to cancel an upcoming tour. The episode unnerved him, but forced him to reflect on his life so far. This is the framework for his hilarious and moving memoir, And Away...Although his childhood in Middlesbrough was normal on the surface, it was tinged by the loss of his dad, and his own various misadventures (now infamous from his appearances on Would I Lie to You?), from burning down the family home to starting a short-lived punk band called Dog Dirt. As an adult, he trained as a solicitor and moved to London. Though he was doing pretty well (the South London Press once crowned him 'The Cockroach King' after a successful verdict), a chance encounter in a pub in the 1980s with a young comedian going by the name Vic Reeves set his life on a different track. And now, six years on, the heart condition that once threatened his career has instead led to new success on BBC2's Gone Fishing.Warm, profound, and irrepressibly funny, And Away... is Bob's full life story (with a few lies thrown in for good measure).
PUBLISHED BY GALLERY UK
PURCHASE LINK
Amazon
MY REVIEW
I listened to the audio version of this book.How can you not love Bob Mortimer?! He's one of those people who comes across as being a blooming nice bloke! And listening to him read his autobiography has been a wonderful delight!Mixing the happier times with the sad, his life has been one of variety! He mixes the stories of the past in well alongside the time he finds himself in hospital about to undergo a heart bypass. From the shyness he suffered, to trying out a number of jobs along the way, to meeting up with Vic Reeves to set him on the path to TV fame, it was just fascinating to hear him looking back over his life and how it has all panned out!Lots of laugh, and happy memories from his many TV shows, made for a very enjoyable listen!
★★★★★
Posted by Books and Me! at Tuesday, October 19, 2021