#BookReview THE NIGHT OF THE FLOOD by ZOE SOMERVILLE #historicalfiction 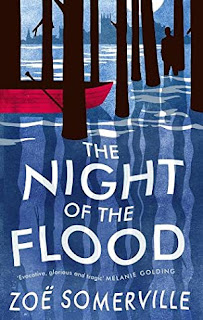 ABOUT THE BOOK
An atmospheric literary thriller set in north Norfolk in the shadow of the Cold War, in which a love triangle turns murderous.

Her heart beat hard. There was a crazed beauty to the storm. It was almost miraculous, the way it took away the mess of life, sweeping all in its path...

No-one could have foreseen the changes the summer of 1952 would bring. Cramming for her final exams on her family's farm on the Norfolk coast, Verity Frost feels trapped between past and present: the devotion of her childhood friend Arthur, just returned from National Service, and her strange new desire to escape.

When Verity meets Jack, a charismatic American pilot, he seems to offer the glamour and adventure she so craves, and Arthur becomes determined to uncover the dirt beneath his rival's glossy sheen.

As summer turns to winter, a devastating storm hits the coast, flooding the land and altering everything in its path. In this new, watery landscape, Verity's tangled web of secrets, lies and passion will bring about a crime that will change all their lives forever.
PUBLISHED BY HEAD OF ZEUS
PURCHASE LINK
Amazon
MY REVIEW
This was a wonderfully intoxicating novel, set around the real life flood that hit the East coast of England in 1953. It merges the before, during and after of the events while looking at the lives of local characters who are all dealing with their own issues and insecurities.It's set in Norfolk, and centres around the goings on of a family living on a farm. Verity lives there with her father and brother, Peter, and they are all still coming to terms with a loss that impacted on them dreadfully. You get the impression that they all feel trapped by past events, and seem unable to fully move on and dream of a life away from the area. Verity especially has ideas of going to University, but that dream is always squashed by her father who wants her married off to a neighbours' son as times are tough and the financial standing of the farm is more important.The Americans are in town due to the local airbase, and when Jack shows up in all their lives it seems to shake things up. He's a character not short of confidence and makes them all sit up and take notice - in good and bad ways!I loved how the story plays out - the build up to the night of the flood showing life carrying on as normal, with the characters having no idea what was just around the corner for them all and that would impact the area so devastatingly.I found all the characters so interesting to read about - the secrets, the emotions - and the impact that a change of personality added to the mix had on them all! It was a very atmospheric read and I was totally captivated by the setting, the impending disaster awaiting them and the angst they were all feeling due to their lives not being what their hearts desired and had left them feeling unsettled and regretful, but aware of responsibilities that were holding them back.
★★★★★
Posted by Books and Me! at Monday, October 11, 2021