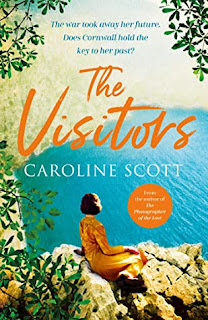 Delighted to be with you today as part of the blog tour for the wonderful THE VISITORS by CAROLINE SCOTT.  My thanks to the author, publisher and Anne of Random Things Tours for putting the tour together and letting me be part of it all!
ABOUT THE BOOK
From the highly acclaimed author of The Photographer of the Lost, a BBC Radio 2 Book Club Pick, comes a tale of a young war widow and one life-changing, sun-drenched visit to Cornwall in the summer of 1923...
Esme Nicholls is to spend the summer in Cornwall. Her late husband Alec, who died fighting in the war, grew up in Penzance, and she’s hoping to learn more about the man she loved and lost.
While there, she will stay with Gilbert, in his rambling seaside house, where he lives with his former brothers in arms. Esme is fascinated by this community of eccentric artists and former soldiers, and as she gets to know the men and their stories, she begins to feel this summer might be exactly what she needs.
But everything is not as idyllic as it seems – a mysterious new arrival later in the summer will turn Esme’s world upside down, and make her question everything she thought she knew about her life, and the people in it.
Full of light, laughter and larger-than-life characters, The Visitors is a novel of one woman finally finding her voice and choosing her own path forwards.
PUBLISHED BY SIMON & SCHUSTER
ABOUT THE AUTHOR 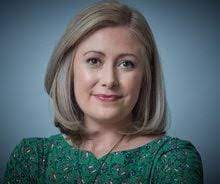 Caroline completed a PhD in History at the University of Durham. She developed a particular interest in the impact of the First World War on the landscape of Belgium and France, and in the experience of women during the conflict – fascinations that she was able to pursue while she spent several years working as a researcher for a Belgian company. Caroline is originally from Lancashire, but now lives in southwest France. The Photographer of the Lost was a BBC Radio 2 Book Club pick.

Another extraordinary piece of writing from Caroline Scott, as she manages to capture the emotions of humans going through heart breaking times with such consideration and care.  You become emotionally attached to the characters as you see them facing up to the tragedies in their life, and wish desperately that they'll come out unscathed on the other side!

Esme is at the heart of the story, set after the Great War and 5 years after she lost her beloved husband in the war.  He grew up in Cornwall, so she finds herself eager to visit the area to see if that can help her connect a little more with the memory of the man she misses so much.

She finds herself staying with a eclectic group of souls, each dealing with their own personal battles, and takes the time to connect with them along with herself and nature.  Nature is at the heart of this book and features strongly throughout and really adds a sense of grounding and calm to the turbulent emotions that many of the characters are going through.

She finds herself spending more time with Rory who has written about his war experiences, so Esme takes time to read his words to help her understand what he, her husband and all the other soldiers went through while fighting on the front line.   His words show a love of nature as well, especially birdwatching, and once again it's a distraction for him and his colleagues to watch the beauty of birds while they face the brutality of war.

There was so much to captivate me as a reader throughout this story.  The humanity, the connections, the emotions - it all plays out at a wonderful pace and the mystery of the new arrival throws the cat amongst the pigeons and adds to the drama and emotions!

This was just a wonderful story that I was captivated by.  The setting, the characters, the sense of history - it was all a perfect blend that created a beautiful piece of storytelling.