#BookReview THE IMPOSSIBLE TRUTHS OF LOVE by HANNAH BECKERMAN 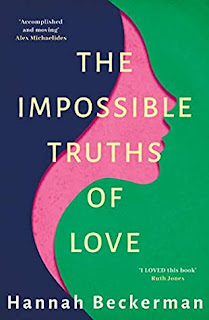 ABOUT THE BOOK
From bestselling author Hannah Beckerman comes a moving story about memory, secrets, and what it really means to feel that you’re one of the family.When Nell’s father makes a deathbed declaration that hints at a long-held secret, it reignites feelings of isolation that have plagued her for years. Her suspicions about the family’s past only deepen when her mother, Annie, who is losing her memories to dementia, starts making cryptic comments of her own.Thirty-five years earlier, Annie’s life was upended by a series of traumas—one shock after another that she buried deep in her heart. The decisions she made at the time were motivated by love, but she knew even then that nobody could ever understand—let alone forgive—what she did.As the two women’s stories unravel, a generation apart, Nell finally discovers the devastating truth about her mother’s past, and her own.In this beautifully observed and emotionally powerful story of identity, memory and the nature of family, Hannah Beckerman asks: To what lengths would you go to protect the ones you love?
PUBLISHED BY LAKE UNION PUBLISHING
PURCHASE LINK
Amazon
MY REVIEW
Emotional. Powerful. Perfection!This was one of those stories that I found myself completely under its' spell immediately! Beautifully written, it captures all the emotions and frustrations of a family dealing with grief, dementia and secrets. From the punchy and emotional opening you are seeing the story through the eyes of Nell, who is faced with watching her father die and on his deathbed he says something to her that rocks her and she can't get it out of her head.So she's on a quest to discover the reality and face some uncomfortable home truths as the storyline flits from the now to then, and this way of telling the story works perfectly, especially as the truth begins to reveal itself.It's full of the drama of a family who are emotional but dealing with the realities of life. Her mothers' dementia also starts to throw up little cryptic clues that cause more confusion for Nell, and going back to the past through the eyes of Annie (the mother) also becomes an extremely emotional story and I just found myself transfixed by the drama playing out in both timelines. The author does a wonderful job of capturing all the differing emotions between family members, the resentments, the tensions, and you can't help but get caught up in the emotion of some devastating revelations. A wonderful and compelling piece of storytelling.
★★★★★
Posted by Books and Me! at Thursday, November 04, 2021