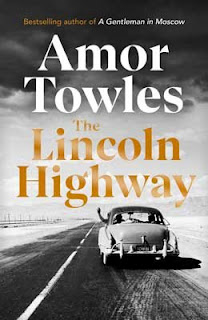 ABOUT THE BOOK
The bestselling author of A Gentleman in Moscow and Rules of Civility and master of absorbing, sophisticated fiction returns with a stylish and propulsive novel set in 1950s AmericaIn June, 1954, eighteen-year-old Emmett Watson is driven home to Nebraska by the warden of the work farm where he has just served a year for involuntary manslaughter. His mother long gone, his father recently deceased, and the family farm foreclosed upon by the bank, Emmett’s intention is to pick up his eight-year-old brother and head west where they can start their lives anew. But when the warden drives away, Emmett discovers that two friends from the work farm have hidden themselves in the trunk of the warden’s car. Together, they have hatched an altogether different plan for Emmett’s future.
PUBLISHED BY HUTCHINSON
PURCHASE LINK
Amazon
Blackwell's - signed edition
MY REVIEW
Amor Towles does it again! Another spectacular and engrossing story that captures your heart and imagination from the get go! Another one of those books where I didn't want it to end and feel bereft without these characters in my imagination anymore!!The story picks up with Emmett being driven home by the warden, back to his younger brother who has been with neighbours since Emmett was taken away a year ago. He is regretful over his choice of action in the past and vows to make up for it, especially where his family is concerned. With his house being foreclosed on, it's time for he and Billy (his wonderful brother!) to make a new life elsewhere and that was their plan - until Duchess and Wooly show up! They've hitched a ride with the warden too, albeit without his knowledge, and now they have scores of their own to settle.What follows is a road trip with a difference! They all set out together , get parted, reunited, and you're constantly on edge as you watch their new paths unfold. The detail in the characters and their personalities are beautifully written, especially the brothers, and it's just a masterclass of the connection between humans. The disappointments, regrets, hopes and fears and I just totally lost myself in their world.Their paths collide again in New York as Emmett tries to get his plans back on track but things don't always work out as he envisaged. Billy is just a wonder of a character - a wise old soul in a very young body, and I just found his outlook on life so amazing and innocent. I was smitten!! It's emotional and captivating in equal measures. Told from various viewpoints, it's seamless in flow and never dips in pace or drama!This has been one of my favourite reads of 2021 and I'm already itching to pick it up again and start the journey with them all over again! Brilliant!!
★★★★★
Posted by Books and Me! at Monday, November 29, 2021