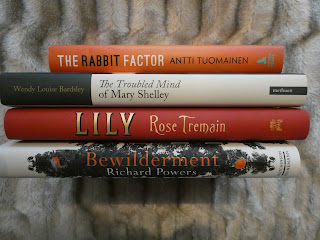 Just thought I'd share a little post about the lovely books that Santa brought my way for being such a good girl this past year ..... stop laughing at the back!! I was good!! Sometimes!!  There may have also been book tokens bought for me as well, one of which I've already put to good use on the Waterstones website while their sale is on, so there'll be another bookhaul post soon when they start arriving!!
Santa did get some help in choosing the books for me as I handily provided a little list!
THE RABBIT FACTOR by ANTTI TUOMAINEN 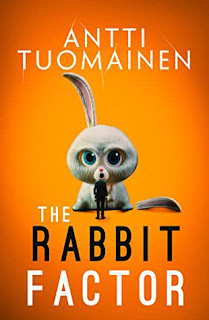 An insurance mathematician’s carefully ordered life is turned on its head when he unexpectedly loses his job and inherits an adventure park … with a whole host of problems. A quirky, tense and warmly funny thriller from award-winning Finnish author Antti Tuomainen.What makes life perfect? Insurance mathematician Henri Koskinen knows the answer because he calculates everything down to the very last decimal.And then, for the first time, Henri is faced with the incalculable. After suddenly losing his job, Henri inherits an adventure park from his brother – its peculiar employees and troubling financial problems included. The worst of the financial issues appear to originate from big loans taken from criminal quarters … and some dangerous men are very keen to get their money back.But what Henri really can’t compute is love. In the adventure park, Henri crosses paths with Laura, an artist with a chequered past, and a joie de vivre and erratic lifestyle that bewilders him. As the criminals go to extreme lengths to collect their debts and as Henri's relationship with Laura deepens, he finds himself faced with situations and emotions that simply cannot be pinned down on his spreadsheets…Warmly funny, rich with quirky characters and absurd situations, The Rabbit Factor is a triumph of a dark thriller, its tension matched only by its ability to make us rejoice in the beauty and random nature of life.
THE TROUBLED MIND OF MARY SHELLEY by WENDY L BARDSLEY 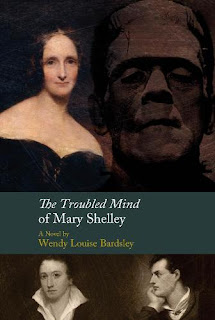 Mary Shelley was the daughter of philosopher William Godwin and Mary Wollstonecraft. Her mother died soon after her birth and her father remarried. The poet Percy Bysshe Shelley was a friend of Godwin and a frequent visitor to his home. Though married with young children, Shelley flirted with Mary and when she was aged sixteen they eloped to Italy. Shelley was always in trouble financially and was forced to move frequently to avoid his creditors. Mary tolerated this lifestyle and also Shelley's constant philandering though she was often desperate with worry about Percy's infidelity. Lord Byron and Shelley met and became friends and this association was another cause for concern to Mary, who at eighteen, began writing Frankenstein, a novel that would bring her lasting fame. After Shelley's death from drowning in Italy, Mary returned to London and pursued her own writing career. In her novel Wendy Bardsley has captured the intensity of Mary's early life and her troubled marriage and the result is a remarkable book and an excellent addition to the genre of historical fiction.
LILY by ROSE TREMAIN 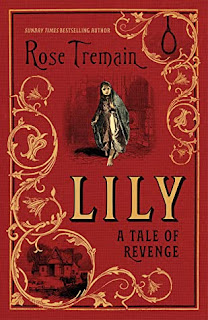 Nobody knows yet that she is a murderer...Abandoned at the gates of a London park one winter's night in 1850, baby Lily Mortimer is saved by a young police constable and taken to the London Foundling Hospital. Lily is fostered by an affectionate farming family in rural Suffolk, enjoying a brief childhood idyll before she is returned to the Hospital, where she is punished for her rebellious spirit. Released into the harsh world of Victorian London, Lily becomes a favoured employee at Belle Prettywood's Wig Emporium, but all the while she is hiding a dreadful secret...Across the years, policeman Sam Trench keeps watch over the young woman he once saved. When Sam meets Lily again, there is an instant attraction between them and Lily is convinced that Sam holds the key to her happiness - but might he also be the one to uncover her crime and so condemn her to death?
BEWILDERMENT by RICHARD POWERS 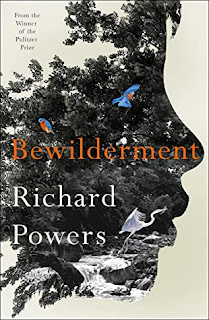 Theo Byrne is a promising young astrobiologist who has found a way to search for life on other planets dozens of light years away. He is also the widowed father of a most unusual nine-year-old. His son Robin is funny, loving, and filled with plans. He thinks and feels deeply, adores animals, and can spend hours painting elaborate pictures. He is also on the verge of being expelled from third grade, for smashing his friend's face with a metal thermos.What can a father do, when the only solution offered to his rare and troubled boy is to put him on psychoactive drugs? What can he say when his boy comes to him wanting an explanation for a world that is clearly in love with its own destruction? The only thing for it is to take the boy to other planets, while all the while fostering his son's desperate campaign to help save this one.
📚📚📚