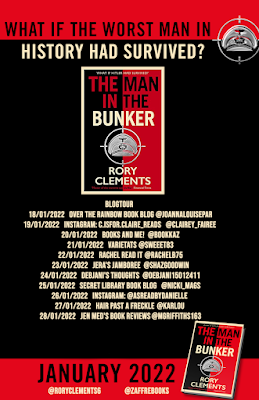 Delighted to be with you today as part of the Blog Tour for the gripping THE MAN IN THE BUNKER by RORY CLEMENTS.
My thanks to the author, publisher and Tracy of Compulsive Readers for putting the tour together and letting me be part of it all!
ABOUT THE BOOK 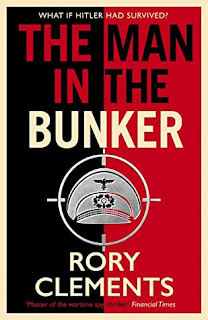 WHAT IF HITLER HAD SURVIVED?

In the gripping new spy thriller from the Sunday Times bestselling author of Hitler's Secret, a Cambridge spy must find the truth behind Hitler's death. But exactly who is the man in the bunker?

Germany, late summer 1945 - The war is over but the country is in ruins. Millions of refugees and holocaust survivors strive to rebuild their lives in displaced persons camps. Millions of German soldiers and SS men are held captive in primitive conditions in open-air detention centres. Everywhere, civilians are desperate for food and shelter. No one admits to having voted Nazi, yet many are unrepentant.

Adolf Hitler is said to have killed himself in his Berlin bunker. But no body was found - and many people believe he is alive. Newspapers are full of stories reporting sightings and theories. Even Stalin, whose own troops captured the bunker, has told President Truman he believes the former Führer is not dead. Day by day, American and British intelligence officers subject senior members of the Nazi regime to gruelling interrogation in their quest for their truth.

Enter Tom Wilde - the Cambridge professor and spy sent in to find out the truth...

Dramatic, intelligent, and brilliantly compelling, THE MAN IN THE BUNKER is Rory's best WWII thriller yet - perfect for readers of Robert Harris, C J Sansom and Joseph Kanon.
PUBLISHED BY ZAFFRE BOOKS
PURCHASE LINK
AMAZON
MY REVIEW
This is Book 6 in the Tom Wilde series, and my first! So that shows how it can be read as a standalone! And now I've got the enjoyment of the rest of the series to catch up with as I found this to be such an intriguing and fascinating subject to have a story based around! The What If subject is one of those conspiracies that still does the rounds now, so the author has done a brilliant job within this series of using that as the backdrop for a new adventure!
This is set just after the war, so the world is waking up again and trying to move on but life is still pretty brutal in many parts of the world with unresolved anger.  Tom Wilde is trying to live a normal life again, but that is blown out of the water when 3 men show up on his doorstep wanting his help in finding out just what happened in 'that' bunker where no body was ever found.
So he has to travel to Germany, interrogate those close to Hitler and others at the top to find out if they know more than they are letting the world believe.
You get a real sense from the story that many people are still on edge after what they've been through for the past few years, and many want revenge for what has happened to them or those they love.  Wilde has a tough job ahead of him getting through to people and trying to work out who he can trust and who is telling the truth.
There's also a side story featuring the character of Lilly too, a woman who had a fling with a german officer and has been shunned by her own family, and it really hit home how the war had split family and friends.
As I said, this was my first book in the Wilde series and I just loved the whole feel and pace of the storytelling so I'm eager to go back and see where the rest of the series took the character!  It is a smart and dramatic piece of historical fiction.
★★★★