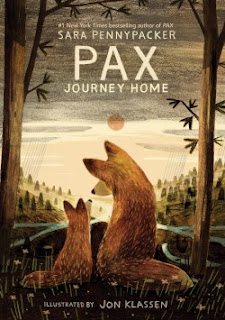 ABOUT THE BOOK
From bestselling and award-winning author Sara Pennypacker comes the long-awaited sequel to Pax; this is a gorgeously crafted, utterly compelling novel about chosen families and the healing power of love.It’s been a year since Peter and his pet fox, Pax, have seen each other. Once inseparable, they now lead very different lives. Pax and his mate, Bristle, have welcomed a litter of kits they must protect in a dangerous world. Meanwhile Peter—newly orphaned after the war, wracked with guilt and loneliness—leaves his adopted home with Vola to join the Water Warriors, a group of people determined to heal the land from the scars of the war.When one of Pax's kits falls desperately ill, he turns to the one human he knows he can trust. And no matter how hard Peter tries to harden his broken heart, love keeps finding a way in. Now both boy and fox find themselves on journeys toward home, healing—and each other, once again.
PUBLISHED BY BALZER & BRAY
PURCHASE LINK
Amazon

Having adored the first Pax book, I was utterly delighted to find out there was a sequel and it has not disappointed! The story of Pax the fox, and Peter continues as they've gone their own way but that bond between them still plays a big part in both their lives.The story is picked up a while after book one, and life is very different for both of them. Peter is unsure of his place in the world, so joins a group that is centred on cleaning up the local river to help bring it back to use for the local wildlife - finding that purpose in life allows him to confront some other issues in his life that are plaguing his thoughts.And Pax has a family of his own now so he's learning all about responsibility and showing that caring side. His female kit proves to be a little feisty and independent and they set off on a little adventure together which proves to be a little too testing.Watching their paths cross again filled my heart with joy, and seeing Peter and Pax reconnecting was so touching especially seeing how much both had grown and after the heart breaking times they'd gone through in their first book. This is a story that is full of friendship, grief, trust and hope and I just found it to be another endearing and captivating story.