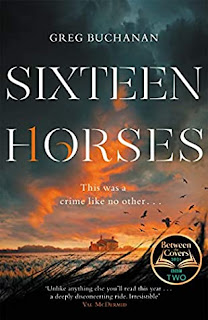 ABOUT THE BOOK
Sixteen horses dead. Each buried with a single eye facing the sun . . .In the dying English seaside town of Ilmarsh, the heads of sixteen horses are found buried in circles, with only their eyes exposed to the light of the low winter sun. The local police call upon forensic veterinarian Cooper Allen to assist with this uniquely disturbing case.In the weeks that follow, investigators uncover evidence of a chain of crimes in this community: disappearances, arson, and mutilations, all culminating in the reveal of something deadly lurking in the ground itself. And as the town panics, not everything in Ilmarsh is as it seems. . . Dark days follow, then Cooper finds herself working with local police detective Alec Nichols to uncover a frightening mystery.A literary thriller from a stunning new talent, Sixteen Horses is about enduring guilt, trauma and punishment, set in a small seaside community the rest of the world has left behind.
PUBLISHED BY MANTLE
PURCHASE LINK
Amazon
MY REVIEW
I listened to the audio version of this book.This is one of those books that is going to be very difficult to review! It's a story that has a little bit of everything, and a lot of darkness ! And for a debut, it's pretty astonishing! I did find myself more invested in the first half of the book which I lapped up at speed, but then either the story lost its' way or my brain just couldn't cope anymore with the changing timelines and narratives, and it disappointingly, for me, just fell away and I lost track. Maybe it's one of those I need to go back to and read again for it all to fall in to place properly!At the heart of the story is the mysterious discovery of 16 horse heads buried and Cooper and Alec are brought in to investigate the significance, if any, and they stumble across some very dark goings on in the past that are still haunting the locals and leads to more questions than answers. These characters are intriguing in themselves as they appear very insular and guarded so watching them slowly reveal little parts of their past is fascinating. And the whole bleakness of the community also adds to the atmosphere and it just feels like everyone has been walking around in a nightmare for many years.This is a uniquely original kind of story and, despite the bleakness, it absorbs you as a reader as you try and unravel the mysteries and significance of the crimes as they unfold.
★★★★
Posted by Books and Me! at Tuesday, January 11, 2022