#BookReview LEAN ON ME by SERGE JONCOUR #LeanOnMe 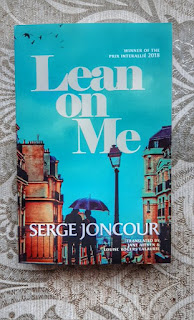 Winner of the prestigious Prix Interallié

When a flock of crows invades their shared apartment block, farmer-turned-debt collector Ludovic and fashion designer Aurore speak for the first time. With nothing but the birds in common, the two are destined for separate lives, yet are drawn inexplicably together.

Though their story is set in Paris, the tale of Ludovic and Aurore is far from an idyllic romance. With one trapped in an unhappy marriage and the other lost in grief, the city of love has brought each of them only isolation and pain. As Aurore faces losing her business and Ludovic questions the ethics of his job, they begin a passionate affair. Love between such different people seems doomed to failure, but for these two unhappy souls trapped in ruthless worlds, perhaps loving one another is the greatest form of resistance.

From the award winning author of Wild Dog, Lean on Me explores the realities of unlikely love, and how connection and intimacy offer us an escape from all that is harsh and cold in our modern day lives.

Another fascinating study of the various traits of humans by the author. After enjoying Wild Dog, I was intrigued to pick up this and I've not been disappointed. He takes some rather unlikeable characters and explores their intentions, struggles and interactions and with each chapter I found myself more entertained by Aurore and Ludovic in their battles with the modern world they find themselves living in.

Aurore is a fashion designer in Paris. Her husband is very successful and you feel that she's always in his shadow and unsure of herself in what she wants to be in life. She takes her business very seriously but finds herself being played by her business partner, and she seems too stubborn to ask for help so is trying to figure things out by herself.And in Ludovic you have a 'loner', working as a debt collector so he's faced with all kinds of stories from his clients day in, day out. He seems to see the good in people and wants to find ways to help them, not too easy in his line of work where money is the bottom line.A chance encounter between Aurore and Ludovic then sets them on an all encompassing affair, that you're left to wonder what each is getting out of it all. Is there more to it than meets the eye? You also get glimpses of their home life and they couldn't be more different and that makes their dalliance that little bit more curious. His backstory especially is quite emotional and can explain why he's so reluctant to let people in and cuts himself off from human contact... until Aurore. There is always that sense of each other being a distraction from the unpleasant realities that they're both dealing with.I thought this was a really interesting story, told at a great pace and full of depth and really well told. It really explores the effects that emotions have on people whenever they're faced with things not going right, and how the consequences of fate intervening play out long term.
★★★★
my thanks to the team at Gallic Press for the advanced reader copy in return for a fair and honest review.
Posted by Books and Me! at Monday, March 07, 2022