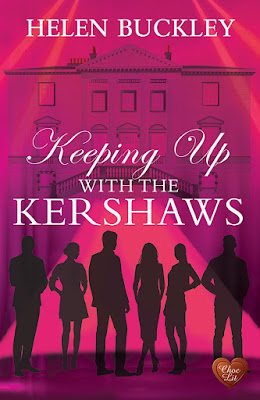 So happy to be with you today to share an exclusive extract from the rather fabulous KEEPING UP WITH THE KERSHAWS by HELEN BUCKLEY, which was released yesterday. If you've not got your copy, WHY NOT?!!!  Go grab yours now! You will not be disappointed!! I promise!!
Over to Helen with the exclusive extract for you to enjoy!!
💗💗💗

Exclusive Extract: Keeping Up with the Kershaws by Helen Buckley

Yesterday Helen Buckley celebrated the release of her fourth book with Choc Lit, Keeping up with the Kershaws – the Kershaws being a family with so much drama they could give the Kardashians a run for their money! Are you ready to meet ruthless ice queen Portia, master manipulator Gabriel, Botox fanatic Arabella, and ladies’ man Rafe, as well as poor Karrie Morgan, the devoted carer to the Kershaws’ father, who has to put up with them all? Read this extract and see if you can resist finding out what happens next …

From: Keeping Up with the Kershaws by Helen Buckley

Karrie knocked gently on the heavy oak door. She traced the whorls of the wood with her fingertips as she waited for a reply. It often took Harold a moment to respond when he was taking his afternoon rest, and she didn’t want to rush him.

The balmy summer air breezed in from the open windows where the hallway overlooked the gardens. Karrie breathed in the scent of the grass, freshly mown that morning by the gardener. The birds were in fine voice as they serenaded the sky, an endless cornflower blue without a cloud in sight. It was the most beautiful July day and Karrie hoped Harold might like to go for a stroll in the gardens that afternoon.

Karrie rested her fingers on the door and nudged it open a little way.

The room remained silent and dark. Karrie pushed the door open further, feeling invasive, but knowing Harold prized his routine and would need his medication soon.

She could make out a rumpled figure on the bed, seemingly undisturbed by her entrance. She went to the window and opened the heavy curtains halfway to allow the sunshine to permeate the dark cool air, and turned to Harold. The world-renowned antiquities expert lay still and quiet, curled up on top of the covers.

Karrie paused, her eyes tracing his features, taking in the slack jaw and the waxy skin, a wan pallor unusual even for a man who hated the sun. Her chest tightened and her breathing became shallow as she knew instinctively that something was very wrong. She put a hand to her mouth and tried to will herself to move forwards, but her feet wouldn’t budge.

She wanted to cry out and she opened her mouth, but she couldn’t make any sound. Instead she heaved a ragged gasp, dropping onto her knees, knowing that there was nothing to be done, knowing that from this moment on her world would be very different.

It was quite clear to Karrie that Harold Kershaw was dead.

Rafe scowled with annoyance as his phone rang. The jarring ringtone, which he kept meaning to change, completely disrupted his focus on his eyebrows, which needed some work before his club appearance that evening. He needed to finish getting ready and he wasn’t in the mood for chit-chat.

He glanced over at the phone to see his sister’s name flashing at him, the persistent shrill ringing as irritating as seeing her name on the screen. Rafe carried on tweezing. Portia could wait.

He sighed with relief when the phone fell silent, only for it to start ringing again almost immediately. He frowned at it and set down his tweezers with a groan of frustration. He checked his appearance in the mirror, neatened a stray hair or two, and swiped the phone off the table, stabbing at the answer button.

‘Portia, I’m just in the middle of something …’ he began, but his eldest sister’s voice cut him off before he could make an excuse for dodging her calls.

‘Daddy’s dead,’ Portia announced. Though the words she said were far from ordinary, she spoke in her usual icy tone, devoid of emotion, and entirely brusque. Despite her voice being instantly recognisable, Rafe still wondered if this was a prank call, so unbelievable were the words she had just said.

‘Wait, what?’ he said. He must have heard her wrong.

Portia sighed and he could imagine her tapping her immaculate nails impatiently on the nearest hard surface.

‘How? When?’ Rafe sat down on the bed, the energy draining from his legs as the news began to sink in. His chest felt heavy as he tried to take a deep breath, but all he could manage was a shallow gasp.

‘He passed away this afternoon, while he was taking his nap,’ Portia said. ‘Apparently it wasn’t painful.’

Rafe detected a slight softening in her voice as she said it. Even Portia wasn’t made entirely of stone, he thought, despite being known for her flinty nature.

‘That’s good,’ he said. The words sounded flat and odd to him, the lack of emotion in his voice not reflecting the turmoil in his head where all his thoughts were suddenly entangled with so many memories. He put a hand to his mouth as a powerful wave of sadness crashed over him, and he swallowed hard against the lump in his throat.

‘What happens now?’ he asked, knowing Portia and Gabriel would sort everything. Although he had suffered under their authoritative and manipulative dominion when he was younger, in some ways it was a relief knowing that his two eldest siblings would have everything under control at a time like this. He didn’t need, and wasn’t expected, to take responsibility. They would never have let him anyway.

‘We’re going to start making funeral arrangements. I’ll text you the details of when to come to the house to meet,’ Portia said, as if she were discussing a business meeting and this were merely a work call rather than a family tragedy. She hung up before Rafe could reply.

He sat for a moment, his hands twisting in the sheets, trying to remember the last time he had seen his dad. He felt a chill shiver of shame run through him when he realised it had been over six months ago, at Christmas. Since then he had been too busy wrapping up filming the latest series of Raised in Richmond and trying to find other projects, to visit his elderly father.

He flopped backwards onto the bed and lay down with a heavy sigh. He would have to cancel his club appearance tonight, he thought; a shame as he was really desperate for a drink right now. He reached out to the bedside table, where a glass stood with a double Scotch he had poured sometime last night and fallen asleep before drinking. It would do for this moment when he didn’t want to move off the bed. He extended his arm and grabbed the glass, tipping the tepid amber liquid down his throat with a single flick of his wrist.

He closed his eyes for a moment and thought back to Christmas, remembering how his dad’s hazel eyes, misty with cataracts, had been brightened by the candles and the Christmas lights. Rafe scrolled through the photos on his phone, looking for photos of them together, but there weren’t any recent ones. The last one he had was from two years ago at a garden party, when Raised in Richmond had the best ratings it had ever had, and his engagement to Megara was all over the magazines. He and his dad were standing side by side, clinking a glass. His dad’s usual solemn expression was lightened, a real pleasure sparkling in his eyes. Rafe would have liked to think that his dad’s joyful look was to do with the success of Raised in Richmond, but he knew that was unlikely. His dad’s happiness that day was caused by the success of his fundraiser, and not anything that Rafe had achieved.

He clicked on the photo and uploaded it to Instagram to share with his 900,000 followers, carefully choosing the best filter, cropping out a little of the background so he and his dad were framed exactly in the centre of the image.

#RIPdad. He typed the caption, and pressed Share. He waited for the inevitable slew of likes and comments and buried his face in his pillow to allow his grief to finally take hold.

What do you do when your life becomes more dramatic than reality TV?

As the devoted carer for famous antique expert Harold Kershaw, Karrie Morgan was always happy to keep a professional distance from his four spoilt grown-up children, who rarely made time for their father. But then a surprise involving Harold’s Will means Karrie is flung headlong into a press scandal, and into the chaotic world of the surviving Kershaws.

With the support of her trusted childhood friend Andrew, mild-mannered Karrie must face down ruthless ice queen Portia, master manipulator Gabriel, Botox fanatic Arabella, and ladies’ man Rafe, star of reality TV show Raised in Richmond … although perhaps not as fake and flashy as he initially seems?

As vicious rumours circulate and Karrie’s past comes back to haunt her, she struggles to know who to trust. Can she keep up with the Kershaws’ schemes? 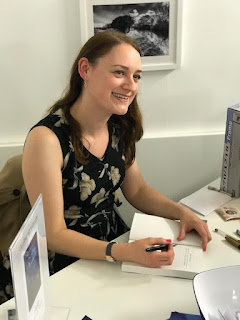 Helen Buckley lives in Bedfordshire with her husband and two sons. After working in the charity sector in the UK and abroad, she turned her hand to writing and her first novel, Star in the Shadows, was published in 2019. She writes any moment that she can, enthralled by stories of fame, romance and happy ever afters. Apart from being addicted to writing and enjoying soft play with her sons, she’s an avid reader, action-movie fan and chocolate addict.

Find out more about Helen here: