#BookReview THE BOOKSHOP ON PRIMROSE HILL by SARAH JIO #TheBookshopOnPrimroseHill 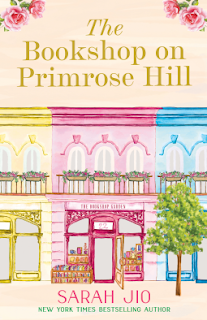 ABOUT THE BOOK
Valentina Baker was only eleven years old when her mother, Eloise, suddenly fled to London, leaving Val and her father on their own in California. Now a librarian in her thirties, Val is fresh out of a failed marriage and utterly disenchanted with life.One day, Val receives word that Eloise has died, leaving Val the deed to both her mother's Primrose Hill apartment and the bookshop she opened twenty years ago. As Val jets across the Atlantic, she wonders - could this be her chance at a new beginning?In London, Val finds herself falling in love with the pastel-coloured flat and the cosy, treasure-filled bookshop. When she stumbles across a series of intriguing notes left in a beloved old novel, it's the start of a scavenger hunt that will take her all over London and back in time... but most of all, bring her closer to the mother she lost twice.Bittersweet and uplifting, The Bookshop on Primrose Hill will steal your heart. Perfect for fans of The Bookish Life of Nina Hill and How to Find Love in a Bookshop. Published in the US as With Love from London.
PUBLISHED BY ORION DASH
PURCHASE LINK
Amazon
MY REVIEW
A book centred around a bookshop?! Full of characters who love books?! YES PLEASE!!! And it hasn't disappointed as I found myself swept along with all the feels in this wonderful new book that sees a woman gaining a connection to her late mother, through the world of books and community she had left behind. I Loved it!!Valentina has been living in America for years, her mother walked out on her and her dad when she was 12, and had no contact with her since, but now she has passed and has left her daughter a property in Primrose Hill, which also contains a bookshop! Her initial thought is to go to England and put the property up for sale and move on with her life. But life has a funny way of throwing a spanner in the works, and a scavenger hunt left behind by her mother adds to the intrigue and Valentina finds herself wanting to know more about this woman who had left them so abruptly all those years ago.The characters are so easy to connect with, and being set around a bookshop always helps! The scavenger hunt clues are a great little invention and allowed Valentina to really connect with her mother in a different way, allowing her to meet people who had become so special to her in the years before she passed. I was totally in love with the setting and the emotional journey you were taken on. Allowing her mother to share her story through the different characters in the community allowed Valentina to see the story from her mums' point of view and as the reader you also get to hear Eloise's story from her point of view, allowing us to travel back in time to see what she went through in finding love and becoming a mother. A wonderful read!!
★★★★★
Posted by Books and Me! at Thursday, April 28, 2022