#BookReview THE DISCORD OF GODS by JENN LYONS @BlackCrow_PR @torbooks 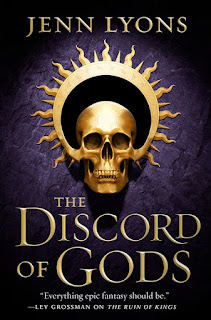 ABOUT THE BOOK
The Discord of Gods marks the epic conclusion to Jenn Lyons's Chorus of Dragon series, closing out the saga that began with The Ruin of Kings, for fans of Brandon Sanderson and Patrick Rothfuss.The end times have come.Relos Var's final plans to enslave the universe are on the cusp of fruition. He believes there's only one being in existence that might be able to stop him: the demon Xaltorath.As these two masterminds circle each other, neither is paying attention to the third player on the board, Kihrin. Unfortunately, keeping himself classified in the "pawn" category means Kihrin must pretend to be everything the prophecies threatened he'd become: the destroyer of all, the sun eater, a mindless, remorseless plague upon the land. It also means finding an excuse to not destroy the people he loves (or any of the remaining Immortals) without arousing suspicion.Kihrin's goals are complicated by the fact that not all of his "act" is one. His intentions may be sincere, but he's still being forced to grapple with the aftereffects of the corrupted magic ritual that twisted both him and the dragons. Worse, he's now tied to a body that is the literal avatar of a star - a form that is becoming increasingly, catastrophically unstable. All of which means he's running out of time.After all, some stars fade - but others explode.
PUBLISHED BY TOR BOOKS
PURCHASE LINKS
Amazon
Blackwell's
MY REVIEW
The fifth and final installment of a truly epic fantasy series - say it ain't so!! But this 'chapter' is a really fitting end to the series and allows us to spend more time with our favourite characters and marvel at the grand scale of the drama and goings on!! Be prepared! This book is full on, non stop action!! There's barely time to draw breath between the chaos and carnage, and that's where the wonderful use of the footnotes come into play as they just allow that light relief and pause as you take stock of what's been going on, and marvel at the 'snark-asm' which this series has been a master at!! Guaranteed to bring a smile and smirk to any grumpy face!The main characters each take their turn in playing a major part in the action, as Relos Var's plans begin to take shape but has he taken his eye off the ball to someone else coming in and spoiling his fun!! There's double bluffs, soul searching and the wonderful interaction between characters as before, my favourites being Kihrin, Janel and Tereath, and there are some satisfying conclusions being played out, along with a few twists and turns that hit hard!!This is a series that has dragons and demons, rituals and revenge, magic and murder, battles and betrayals, and most importantly, the wonderful world building that allows your imagination to go nuts! It's a series I've loved and I'm very sad to see it go! Thank you Jenn Lyons for the ride!!
★★★★★
My thanks to the team at Black Crow PR for the advanced reader copy in return for a fair and honest review.
Posted by Books and Me! at Tuesday, April 26, 2022