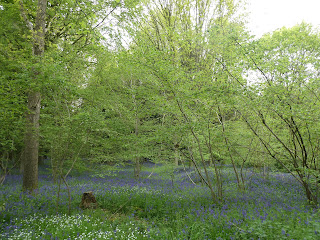 Hello! Happy Saturday! What a week it has been!  I turned 50 (aarrgghhh!) at the start of the week so it's been nice doing stuff with family and it now means there may be book tokens to be spent!! So watch out for a book haul post coming up fairly soon.... when I can decide which new books I need to be purchasing!
So it's been a very slow reading week for me with just 1 book finished LOL!! But there have been 2 Netgalley additions along with some wonderful BookPost additions to my world!
Here's my look back!
BOOKS FINISHED
JINGLE BELLS IN JUNE by ROSIE GREEN - 5 STARS 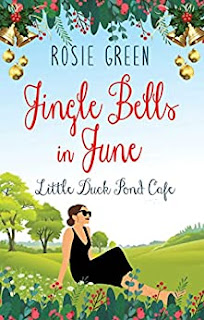 BOOKHAUL
Let's get the Netgalley additions out of the way first...
THE IT GIRL by RUTH WARE
publication date - August 2022 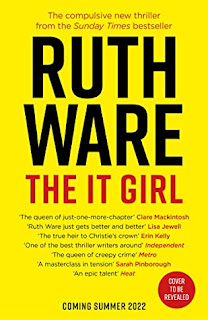 The #1 New York Times bestselling author of One by One returns with an unputdownable mystery following a woman on the search for answers a decade after her friend’s murder.April Coutts-Cliveden was the first person Hannah Jones met at Oxford.Vivacious, bright, occasionally vicious, and the ultimate It girl, she quickly pulled Hannah into her dazzling orbit. Together, they developed a group of devoted and inseparable friends—Will, Hugh, Ryan, and Emily—during their first term. By the end of the second, April was dead.Now, a decade later, Hannah and Will are expecting their first child, and the man convicted of killing April, former Oxford porter John Neville, has died in prison. Relieved to have finally put the past behind her, Hannah’s world is rocked when a young journalist comes knocking and presents new evidence that Neville may have been innocent. As Hannah reconnects with old friends and delves deeper into the mystery of April’s death, she realizes that the friends she thought she knew all have something to hide…including a murder.
THE HIDEAWAY by NORMA CURTIS
publication - June 2022 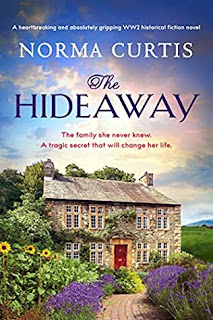 Thea looked at the small suitcase on the kitchen table. The tan leather was scuffed, with the soft gleam of age. She ran her hands over the smooth, cool lid. The thunk of the lock sounded very loud in the stillness of the cottage and she froze, her eyes on her grandmother’s bedroom door. Hearing nothing, she took a big breath and peered inside…Hedi Fischer, aged ninety, smooths her hair and applies a touch of red lipstick from the tube. Over her pristine wool skirt suit she has knotted a men’s tartan bathrobe, wrinkled and frayed with age. Hedi hasn’t taken it off since Harry passed. Since the day she gave away everything but her battered leather suitcase and decided that she too was ready to die.Thea has never met her grandmother Hedi, so she’s surprised when she receives a call from social services to take the frail old woman home. She’s not sure how Hedi will fit into her new life – the one where she’s left her boyfriend and moved into a run-down cottage miles from the nearest town. And Hedi refuses to talk about her past, or why she and Thea’s mother haven’t spoken for more than thirty years. So when Thea spots Hedi’s old suitcase on the table, she can’t resist taking a peak inside.What Thea finds there is more heartbreaking than she could have ever imagined. It is a story that begins in World War Two, when young Hedi arrives by train at a Nazi concentration camp, from which she has no hope of escaping alive…
ITHACA by CLAIRE NORTH
publication date - September 2022
Extremely excited with this bookpost from Little Brown Book Group, as it came with a cross stitch kit!!  My 2 favourite things collide!!  So I'm excited to stitch the cover, as well as read the book! 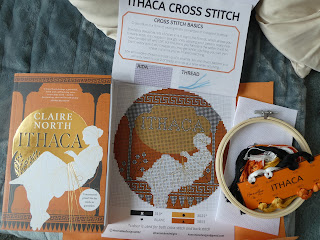 Seventeen years ago, king Odysseus sailed to war with Troy, taking with him every man of fighting age from the island of Ithaca. None of them have returned, and the women have been left behind to run the kingdom.

Penelope was barely into womanhood when she wed Odysseus. Whilst he lived, her position was secure. But now, years on, speculation is mounting that husband is dead, and suitors are starting to knock at her door . . .

But no one man is strong enough to claim Odysseus' empty throne - not yet. Between Penelope's many suitors, a cold war of dubious alliances and hidden knives reigns, as everyone waits for the balance of power to tip one way or another. If Penelope chooses one from amongst them, it will plunge Ithaca into bloody civil war. Only through cunning and her spy network of maids can she maintain the delicate balance of power needed for the kingdom to survive.

On Ithaca, everyone watches everyone else, and there is no corner of the palace where intrigue does not reign . . .
HOPE FOR THE RAILWAY GIRLS by MAISIE THOMAS
signed copy from the author for review 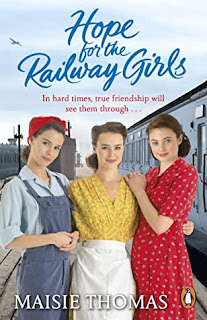 Manchester, 1942A new year brings new hope for the railway girls.Alison's romance with the charming Dr Maitland is blossoming, but then she is posted away from Manchester. Working in a canteen isn't part of her plan, nor is meeting her beau's old girlfriend. One who just happens to want him back.Margaret is supportive of her friend's new relationship until she realises exactly who he is. Torn between keeping her secret and warning Alison, she turns to Joan for help.Working in Lost Property wouldn't be Joan's first choice of job, but with a baby on the way she knows she can't continue being a station porter. She's also eligible to be evacuated but could she leave Bob - and Gran - behind?Being a railway girl isn't always easy but together they can overcome every challenge that stands in their way.
And then I received these 3 proofs from Harper Fiction for helping them via The Readers Room 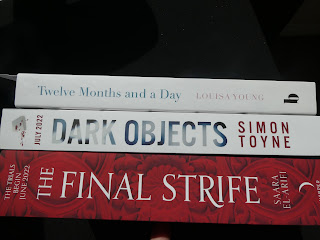 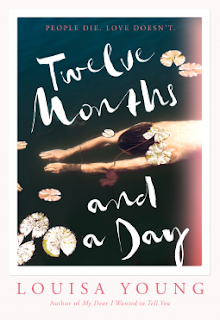 Rasmus and Jay, Róisín and Nico – two beautiful, ordinary love stories, cut short by death. Jay and Nico don’t even believe in ghosts, yet they seem to be… still here. Still in love with Rasmus and Roísín. And maddeningly powerless.

Both are incapable of leaving the living alone: Jay plays matchmaker, convinced that Rasmus and Róisín can heal each other; Nico, plagued by jealousy, doesn’t agree.

Rasmus and Róisín are just trying to navigate their newly widowed lives.

But all four of them are thinking the same thing: what is love, after death? What is it for? And what are we to do with it?

Moving and thought-provoking, playful and bittersweet, this is a Truly, Madly, Deeply for our times, showcasing one of Britain’s finest contemporary writers at her very best. 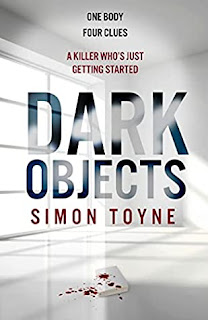 Forensics expert Laughton Rees tracks an unusually clever killer while trying to overcome her own dark family history in this twisty new psychological thriller by the bestselling author of the Sanctus trilogy.When she was fifteen years old, Laughton Rees witnessed the brutal murder of her mother by a masked killer—and barely escape with her own life. In the aftermath, she cut off all contact with her father, a police commissioner at the time, whom she blamed for failing to prevent the murder, and locked her past away for good… or so she thought.Now a successful forensics professor, Laughton’s focused on her daughter and her work—but the past isn’t done with her. When Laughton’s book about criminal investigation is found at the scene of a violent murder, the Met police officer in charge of the case asks for her help. The crime scene has some disturbingly personal elements for Laughton, and she can’t shake the feeling that someone is sending her a message. After all these years, has the monster who murdered her mother come back for her?Laughton is no longer the terrified teenager who fled the masked killer back then, but she’ll have to face her history head on—including the father she hasn’t spoken to in years—in order to take down the psychopath from her nightmares… and keep him from destroying her family once again.
THE FINAL STRIFE by SAARA EL-ARIFI
publication date - June 2022 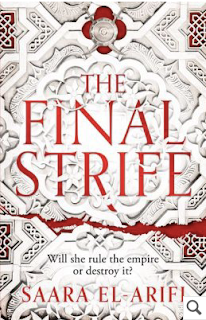 In the first book of a visionary African and Arabian-inspired fantasy trilogy, three women band together against a cruel Empire that divides people by blood.Red is the blood of the elite, of magic, of control.Blue is the blood of the poor, of workers, of the resistance.Clear is the blood of the servants, of the crushed, of the invisible.Sylah dreams of days growing up in the resistance, being told she would spark a revolution that would free the Empire from the red-blooded ruling classes’ tyranny. That spark was extinguished the day she watched her family murdered before her eyes.Anoor has been told she’s nothing, no one, a disappointment by the only person who matters: her mother, the most powerful ruler in the Empire. But dust always rises in a storm.Hassa moves through the world unseen by upper classes, so she knows what it means to be invisible. But invisibility has its uses: It can hide the most dangerous of secrets, secrets that can reignite a revolution.As the Empire begins a set of trials of combat and skill designed to find its new leaders, the stage is set for blood to flow, power to shift, and cities to burn.
CURRENTLY READING
FIRST BORN by WILL DEAN 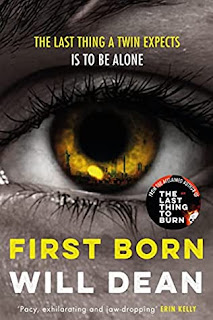