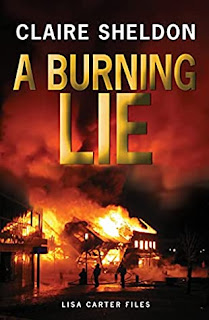 Delighted to be with you today to share an extract from the amazing new thriller from CLAIRE SHELDON!  It's publication Day for A BURNING LIE and this is another one of those books that you NEED in your library!!  Links to buy down below!!

A Burning Lie is the third book in the gripping ‘Lisa Carter’ series by thriller author Claire Sheldon, published by Ruby Fiction. To celebrate publication day, here’s an exclusive extract from the beginning of the book. Just what are DI Chris Jackson and Jen Garner going to have to deal with this time? You’re sure to want to find out after reading this!

‘Come on, Gabe.’ Dean raced up the stairs towards where the band were playing.

‘Slow down! I’m coming, I’m coming.’ Light emanated from the stage as the lead singer of the young support band sang. ‘See, I told you there was no need to rush. The support band’s still playing,’ Gabe said as he caught up with Dean, who was now standing in the doorway and looking excitedly into the packed hall.

‘I just want to make sure we can get to our usual spot,’ Dean replied, grabbing Gabe’s hand. They made their way through the packed room, where everyone was standing shoulder to shoulder and any space they could find would come at a premium. As they continued to squeeze their way past people, Gabe suddenly noticed a strange smell.

‘Can you smell that?’ he shouted towards Dean, who was too preoccupied in trying to get them a prime spot. It’s probably just someone’s perfume, he thought, as Dean continued to pull him along, but it didn’t really smell like perfume exactly. It was sort of citrusy though …

‘Sorry, sorry, excuse me.’ Dean stopped, turned and looked at him. ‘Here we go.’

‘Dean, I can’t move, let alone breathe!’ Gabe protested, looking around at all the people they had displaced just to get into the middle of the room.

‘Once the support band comes off, there’ll be plenty of space. Everyone heads to the bar, remember?’

Gabe hoped so, but this was a sold-out concert. He couldn’t help but feel uneasy, although he had no idea why; there seemed to be strange atmosphere tonight, and he didn’t think it was just to do with the other revellers Dean had annoyed in his quest to get to their spot.

‘Who’s ready for the McDermitts?’ the support band singer shouted, causing people to scream with excitement and surge forward, pushing Gabe and Dean as they did.

Gabe really hoped that Dean was right about the crowd thinning out. Right now, he was starting to feel a little bit trapped …

‘Good evening, Inspector.’ Chris scrunched his eyes closed and opened them again as he listened to the voice on the other end of the phone. ‘I’m phoning to tell you that there have been reports of a series of explosions in the centre of Nottingham. We’ve been instructed to call your team in.’

‘Where are we needed?’ Chris jumped up from his sofa and then regretted it as the room immediately started spinning. He was forced to sit down again as a sense of dread descended over him.

‘Detective Inspector Shufflebotham is on the scene as SIO and has asked that you make your way to the main entrance of the university.’

‘All received. I’ll be there.’ Chris got up more slowly from the sofa. It didn’t help that he now felt sick from the thought of what he might be facing once he got into Nottingham. He’d seen the aftermath of enough fires to know what could await him, and what was worse was it was likely to be young people involved this time.

He had spent the previous afternoon in a MRI scanner at the Queen’s Medical Centre, having his brain and spinal cord assessed for signs of what was causing the symptoms that were now part of his daily existence. It was becoming a regular occurrence: he’d previously been rushed in for an emergency MRI scan after going to see his doctor with rising concerns about dizziness and headaches. Six months on, he was still haunted by the grainy image of the white mass that had appeared on the original scans. As a result, he was now under investigation for a potentially life-altering disease that could change everything about his current existence. Both him and his consultant knew what was coming, but the reality of it all was too scary to think about …

Leaving his cat a plate of food, Chris grabbed his backpack and rushed out of his flat. As he drove his car out of the underground car park and towards Nottingham, he turned on his radio in hope there would be some information about what was happening on the local news broadcasts – though it didn’t seem to have filtered through just yet. He joined the almost empty A52 and made his way into the city to meet the team, where they’d hopefully all find out what the hell was going on. His medical worries would just have to wait, just like they had already been waiting for the past two years.

Jen had to force her eyes to stay open as she attempted to locate where the ringing noise was coming from before it woke anyone else up – the kids being her main concern. She felt completely shattered, having completed her first day back at work with Nottingham’s Special Ops team under DI Chris Jackson. She’d previously worked a case with Chris and her old team, which had become the catalyst for getting her back into full time policing.

‘Detective Garner, it’s control. Sorry to disturb you this early.’

‘What’s going on?’ Is it normal to be called in the early hours on the second day of a new job?

‘I’m afraid there’s been a serious incident in Nottingham and your assistance has been requested at the university. DI Jackson will meet you there.’

‘Okay, I’ll head in now,’ Jen said as she got out of bed and stretched. Well, this is what I signed up for, what I wanted … isn’t it?

‘I’ve got to go into work. Something’s kicked off and we’ve all been called in. Will you make sure the kids get to school? I’ll get back as soon as I can.’ Not bothering to wait for a reply, she leant over and kissed him. ‘Love you.’

Jen rushed down the stairs as the adrenaline hit. She hadn’t been expecting anything big to happen here in Nottingham; her new boss had already warned her that this was “local-level policing” and not what she had been used to in the past. She threw on her jacket and then was out of the door, into the car and on her way to the city and whatever awaited her there.

From: A Burning Lie by Claire Sheldon

When a deadly explosion brings secrets and lies to light …

A city shaken to its foundations by a fire in a well-known music venue. A nightclub owner seemingly more concerned about money than the lives of the young people who fill the dancefloor at the end of every week. A dangerous bomber still on the loose.

All things that Detective Jen Garner must face in her first week of local level policing whilst trying to start afresh and finally make a break with her past.

Working alongside DI Chris Jackson, it’s crucial that Jen connects the dots to bring the culprit to justice. But it seems that everywhere Jen turns there is somebody with something to hide – and whilst she and her team attempt to unravel a web of lies years in the making, could the bomber be getting ready to strike again? 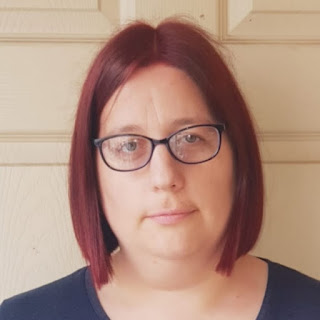 Claire lives in Nottingham with her family, a cat called Whiskers and a dog called Podrick. She suffers from Multiple Sclerosis and as a result of the disease had to reduce her hours working in insurance for an Insolvency Insurer. This spare time enabled her to study a creative writing course which inspired her to write her debut, Perfect Lie. When Claire isn’t working she enjoys reading crime novels and listening to music – the band Jimmy Eat World is her biggest muse. Claire is also an avid reader and book blogger. The inspiration for her novels comes from the hours spent watching The Bill with her grandparents and auntie; then later, Spooks and other detective programmes like Morse, A Touch of Frost and Midsomer Murders.

Find out more about Claire here: