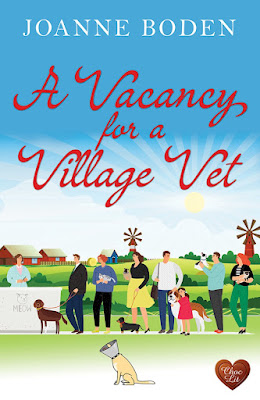 Hello!! Welcome to Books and Me!  And today I have the pleasure of sharing an exclusive extract with you to help celebrate Publication Day for the fabulous A VACANCY FOR A VILLAGE VET by JOANNE BODEN.   The link to grab your copy is posted below too so treat yourself!! You won't regret it!!

Release Day Extract: A Vacancy for a Village Vet by Joanne Boden

A Vacancy for a Village Vet is a cosy new contemporary romance from Joanne Boden – a book about second chances, making peace with your past and plenty of pets, of course! To celebrate publication day, we thought we’d share an exclusive extract from the very beginning of the book – kindly hosted by Karen on her blog – where everything is about to change for Daniel and Hannah …

Daniel pulled Hannah towards him and closed his eyes. He couldn’t look at her, couldn’t bear to look into those smokey grey eyes and see nothing but sadness and hurt. He inhaled her strawberry shampoo, felt her breath on his neck. She couldn’t see his face. He wouldn’t cause her pain by allowing her to see the lie that lay beneath the surface.

‘I’ll be back,’ he said, unable now to stop those words, his throat tight and dry. He stroked her flyaway blonde waves that could never be tamed and rested his hand on the back of her head.

‘And you’ll write to me every day?’ she asked.

He heard the uncertainty in the shaking of her words. Her hands now clung to his , nails digging into his skin.

He wanted to slow time. To stay in this moment forever. They’d agreed to write proper letters, not quick texts or emails, although of course they could. “Handwritten letters are much more romantic” she said. They reminded her of the olden days. Of “Elizabeth and Mr Darcy”.

‘I’ll write to you,’ he said. His fingers twisted in her hair.

He wanted to believe that he would.

A car horn sounded. His mother popped her head out of the half-lowered window, followed by a plume of cigarette smoke. ‘Daniel,’ she hollered, ‘we need to get going.’

He exhaled slowly, felt Hannah’s shoulders relax slip away from him as she stepped back. She swiped a finger across her eyes. A smear of black mascara followed in its wake. She gave him a slow, sad smile.

He reclosed the gap between them and hisis fingers traced her cheekbones as he dipped his head to give her one last, tender kiss on the lips.

Eyes were on them. He wished with every breath in his body that they were alone.

“You’re only kids”, his mum had told him, when she announced she’d be moving to London with her shiny new husband, although none of this was David Brewer’s fault. Daniel liked him. He hadn’t pretended to be a substitute father. After all, he had a grandfather for that. David had made that perfectly clear.

She told him with a faraway look in her eyes that she had fallen in love at sixteen, and look where that had landed her – almost as an afterthought she’d quickly added she wouldn’t have changed having him for the world. But he’d seen the stark truth in those words. She’d have changed things in a heartbeat. Back then at least, maybe not now. That boy she had loved was long gone, married twice since then, and with four kids to his name, not including Daniel. He had never been a part of his life.

“Stay or go” his mother told him, giving him a choice. The decision was his, and his alone. Go to London, or stay here in Middlefern with Gerald. “It’s up to you. You’re nearly sixteen, old enough to make up your own mind”. But apparently not old enough to know if he was in love with a girl he had loved all of his short life.

There was no choice. There had never been a choice.

He couldn’t stay in Middlefern, not under the same roof as Gerald. He’d briefly toyed with the idea of asking Kathy, Hannah’s mum, if he could stay with them, but that, he knew, would only lead to more questions, none of which he could answer. The main one being, why couldn’t he stay with Gerald?

If he left he knew he could never come back, not while Gerald lived and worked in the village. He could never return.

So he did what he had to do. He lied and told Hannah he would do all of those things. His final act of kindness before breaking her heart.

‘It’s time to go, son.’ Gerald stood on the threshold to his veterinary practice, arms folded across his broad chest, a slight sneer spread across his face. Daniel’s hands curled into tight fists. He refused to turn around. He would not look at him. He’d never have to look at him again.

Gerald sauntered past them and stopped at the side of the car. He peered in through the passenger window. ‘You got everything, Samantha?’ he asked.

She nodded. ‘Yes, and thank you, for everything.’

‘Take care of yourself, and phone me when you get there.’

Daniel’s jaw tensed as he reached for Hannah’s hand. ‘I’ll write soon,’ he said. Another lie.

‘Promise.’ He very nearly choked on the word. His final act of betrayal.

He turned to go, but she grabbed his arm and pressed something cold and hard into the palm of his hand.

He nodded, unable to formulate any words.

He turned towards the car, averting his eyes so he wouldn’t see Gerald.

Kathy placed her arm around her daughter’s shoulder. The two of them like statues, silently watching him go.

‘Bye, son,’ Gerald said as he grabbed Daniel’s arm, forcing him to stop.

Daniel looked at his shoes, taking solace in this small victory.

‘Look after your mum for me,’ Gerald growled.

Daniel shook his arm free and unfolded his long, lean body into the car. He shut the door without turning to face the old man. Instead he looked at his mother.

‘I hope so,’ he said. He had a chance at a brand new start. Away from Middlefern and away from him. He just wished Hannah could be a part of that new start. Maybe in time she could join him. Travel to London. She could go to university there, as they’d planned. Maybe they could buy a flat. Move in together. It was possible. Anything was possible, wasn’t it?

But even as he had these fleeting thoughts he knew it was a fantasy.

This was the end.

Time to move on.

He would forget and so would she. Given time.

The car pulled away from the kerbside.

Hannah lifted a hand to wave, but it slowly dropped as she hugged her arms around her body. He saw Kathy raise her hand to stroke her daughter’s hair. The image became smaller and smaller in the rear-view mirror. He observed the whispering of words that he could not hear.

His fingers unfurled and in his palm he found half a heart. A locket made of sterling silver. He turned it over. There was no engraving, just smooth metal, the size of a ten pence piece. It took several seconds before it hit him like a punch to the gut. He had half, Hannah the other. Two halves of one heart, forever broken.

From: A Vacancy for a Village Vet by Joanne Boden 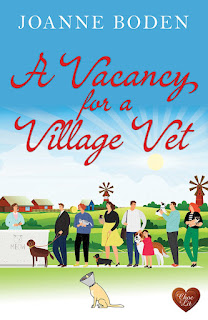 Hannah and Daniel were teenage sweethearts, but then Daniel left their sleepy village of Middlefern and his grandfather’s veterinary practice behind for the bright lights of London.

Now, fifteen years later, the prodigal grandson has returned to temporarily take over the village practice with a veterinary qualification and his dog, Sammy, in tow. Daniel is ready for rabbits with tummy aches, guinea pigs who’ve lost their squeak, plenty of cow complaints and a whole lot of memories – both good and bad. But is he ready to see Hannah again?

Of course, a high-flying city vet like Daniel was never planning to stay in Middlefern for good – especially given his history with the place. But could another, even more important, vacancy convince him to change his mind? 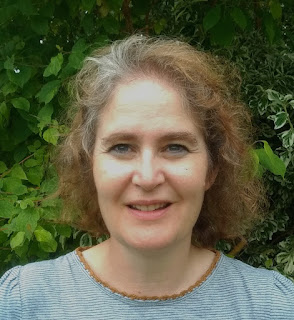 Joanne lives in Lancashire with her husband and their two sons. When she is not busy writing, she likes to take her boys to the local museums, cafes and for walks in the countryside. Joanne has published 4 non-fiction works aimed at parenting children on the Autistic spectrum, based upon her experiences as a mother of an autistic son.

Find out more about Joanne here: