#BookReview ACTS OF LOVE AND WAR by MAGGIE BROOKES 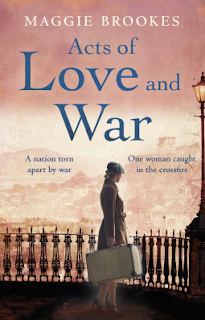 ABOUT THE BOOK
1936. Civil war in Spain. A world on the brink of chaos . . .21-year-old Lucy feels content with her life in Hertfordshire - not least because she lives next door to Tom and Jamie, two very different brothers for whom she has equally great affection.But her comfortable life is turned upside down when Tom decides he must travel to Spain to fight for the Democratic party in the bloody Spanish Civil War. He is quickly followed by Jamie who, much to Lucy's despair, is supporting General Franco and his Fascist party.To the dismay of her irascible father, Lucy decides that the only way to bring her boys back safely is to travel to Spain herself to persuade them to come home.Yet when she sees the horrific effects of the war, she quickly becomes immersed in the lifesaving work the Quakers are doing to help the civilian population, many of whom are refugees.As the war progresses and the situation becomes increasingly perilous, Lucy realises that the challenge going forward is not so much which brother she will end up with, but whether any of them will survive the carnage long enough to decide . . .
PUBLISHED BY CENTURY
PURCHASE LINK
Amazon
MY REVIEW
Wow! This was a book that put me through a whole range of emotions!! A brilliant piece of historical writing that gives you a real feel for the turmoil of the times, and how that impacted on people.Set around the Spanish Civil War, we are introduced to 21 year old Lucy who lives a very restricted life in Hertfordshire. And next door live 2 brothers, both in love with her, and all good friends but dealing with the emotions of growing up. When they read newspaper reports of unrest in Spain, first Tom goes to Spain to fight, followed soon after by Jamie - but for different sides. And that shows just how much this war split family and friends, something I'd not considered with my limited knowledge of the Civil War in Spain.Lucy then finds herself wanting to do something to help, so she travels to join the Quakers as her caring attitude, and experience as a teacher, puts her in a great position to do something positive. But her main aim is to get the brothers home and safely. Throughout the war she receives letters from both brothers and I found this to be a really clever way of conveying their personal feelings, alongside that of frontline reports of what was happening and the things they were having to face and deal with.What follows is a real rollercoaster of life during wartime - you cannot help but become so involved with these characters and willing there to be a happy ending, but knowing there will most likely be sadness and the dangerous situations people will put themselves in to help others is inspiring.A story and characters that will stay with me for some time to come! Wonderful written and a story that really shows the human impact of war.
★★★★★
Posted by Books and Me! at Tuesday, July 05, 2022