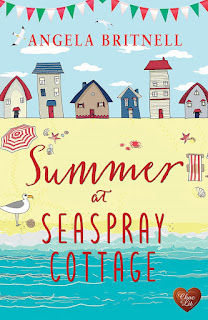 ABOUT THE BOOK
What would you do if you inherited a Cornish cottage by the sea?
If you’re Thea Armitage, sell it as soon as possible. Whilst there’s no denying that Seaspray Cottage has its charm, it just holds too many bad memories for Thea to consider keeping it – although at least spending the summer preparing it for sale gives her a distraction from troubles back home in Tennessee.
What Thea didn’t count on was her worst Cornish memory moving in right next door. Local bad boy Harry Venton played no small part in Thea’s decision never to return to Cornwall twenty years before – and now he’s her neighbour! Could things get any worse?
Except Harry isn’t the boy he was, and as Thea comes to realise that her opinion of him was built on lies and misunderstandings, perhaps things will start looking up for her summer at Seaspray Cottage.
PUBLISHED BY CHOC LIT
PURCHASE LINKS
Amazon: Summer at Seaspray Cottage: An uplifting, feel-good summer romance! eBook : Britnell, Angela: Amazon.co.uk: Kindle Store
Apple: https://books.apple.com/gb/book/summer-at-seaspray-cottage/id6442943846?uo=4&ls=1&at=1l3vpUI&ct=kgsztl%7Cchoc-lit.com
Kobo: Summer at Seaspray Cottage eBook by Angela Britnell - 9781781891179 | Rakuten Kobo United Kingdom
Google: Summer at Seaspray Cottage - Angela Britnell - Google Books
Nook: Summer at Seaspray Cottage by Angela Britnell | NOOK Book (eBook) | Barnes & Noble® (barnesandnoble.com)
MY REVIEW
This was just delicious!! It's one of those books that you just totally lose yourself in and start packing up your belongings so you can move to the location featured - and hope to bump into someone like Harry!!The story centres around Thea and her return to an area she was desperate to get away from in her youth. She inherits a cornish cottage by the sea, idyllic for most people, but her plan is to sell it ASAP!On her return she reconnects with her friend Kelsey, and also Harry, who was the main reason she left 20 years ago. He's not liked by many of the locals, but had a tough upbringing and Thea knows him better than others so she's always willing to fight his corner, despite their relationship ending on a bad note. But time is a healer eh, and now they're all grown up maybe there is peace to be had and old feelings to explore!!This is all about making peace with the past, and the more time she spends in the area, the more she grows and understands she's right where she needs to be, despite her father back home in Tennesse wanting her to take the promotion he has offered her. There's a lot about family relationships as there are many issues to sort out between various characters, and I really enjoyed seeing how they worked through their problems.This is a story full of sexy seaside summer shenanigans!! I loved how the characters were mature about the more serious issues they were faced with and weren't afraid to confront their feelings and see things from a different perspective! Now I just need to find a Harry of my own!!
★★★★★
Posted by Books and Me! at Monday, July 18, 2022