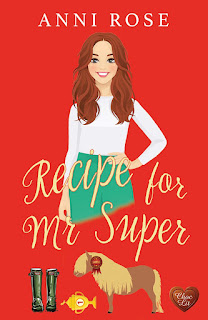 Delighted to be with you today to help celebrate release day for the fabulous RECIPE FOR MR SUPER by ANNI ROSE.   So I'm handing over the Blog today so she can share some thoughts on her inspiration!
Over to you Anni.....
🐴🐴🐴

Born and raised in Berkshire, I emigrated to Wiltshire seven years ago, where I now live with my husband, sister, two dogs and Midge, the grey speckled hen.

As a child, I loved writing fiction, producing reams of stories, thankfully lost over the years, although recently when we cleared my mother’s house out, ‘The attack of the Killer Tomatoes’ did resurface.

On leaving school, the need to earn a living sort of got in the way of any creative ambitions and I became an accountant where my only published work apart from regular financial reports was the employees’ handbook.

A local writing course and an encouraging group of writing friends re-ignited the fiction flame many years later and I went on to win or be short listed in several writing competitions. I had short stories published in Writers Forum, My Weekly and Sophie King’s ‘How to Write your Life Story’.

These days I would describe my writing as modern romantic stories with a healthy dollop of humour thrown in. I’m a member of the Romantic Novelists’ Association and was delighted to have been signed by Choc Lit Publishing in 2021. Recipe for Mr Super is the third in my ‘Recipes for Life’ series and follows hot on the heels of Recipe for Mr Perfect and Recipe for Mr Right, both published last year.

Away from the garden and writing I can usually be found behind a camera, walking the dogs, enjoying one of my husband’s curries or my sister’s bakery treats.

The ‘Recipes for Life’ Series are all set in my fictional town of Redford. They are stand-alone novels although I have to admit some of the characters may have written themselves into more than one book.

Recipe for Mr Super was inspired by the four years spent working as an heir hunter and my love of horses. Having been lucky enough to ride and/or own some amazing horses over the years this is my tribute both to them and the lovely people I have met through riding over the years and to one amazing Shetland Pony who had a thing about Wellington boots!

Find out more about Anni here:

Where’s a hero when you need him?

In Autumn Rigden’s case, enjoying semi-celebrity status on the other side of the world. Although Nick Flynn is no superman – talented horse rider and Super Sportstar of the Year he might be, but he has a habit of leaving Autumn in the lurch when she needs him most.

Anyway, Autumn is too busy with her new career to care about Nick. Okay, so she’s had to give up her OIympic dressage dream, her childhood home and beloved Shetland pony – and all to the benefit of Gordon, Nick’s money-grabbing father. But Autumn’s new ambition is to become an heir hunter extraordinaire, and with a promising commission and only a few weirdos demanding she prove they’re related to royalty, she’s all set.

But when Mr Super returns, will Autumn find that forgetting about horses and the Flynns is harder than she could have ever imagined?